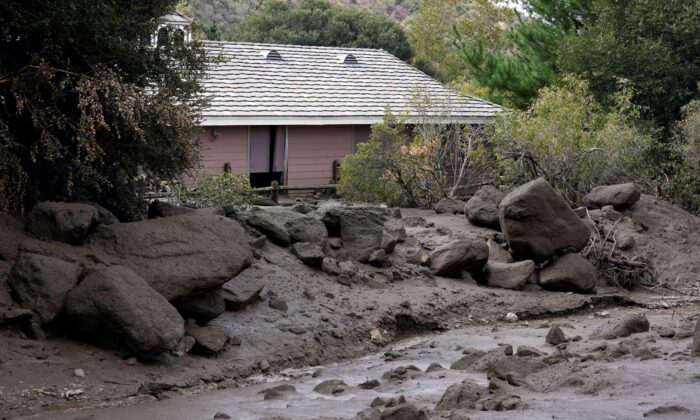 The front yard of a property is covered in mud in the aftermath of a mudslide in Oak Glen, Calif., on Sept. 13, 2022. (Marcio Jose Sanchez/AP Photo)
Southern California

YUCAIPA, Calif.—A woman who disappeared when a downpour in a recently burned area unleashed mudslides that tore through her Southern California mountain community was found dead under mud, rocks, and other debris, authorities said Friday.

First responders, including K-9 units, searched for Doris Jagiello, 62, amid the devastation in Forest Falls, a former summer getaway for cabin owners that has become a bedroom community. A large debris flow, full of mud and “extremely large boulders,” hurtled downhill and crashed into Jagiello’s home, causing significant damage “and carrying away everything in its path.”

Jagiello’s body was found Thursday, buried under several feet of mud. Her remains were located about 20 to 30 feet from her home, in a debris-strewn area with rocks ranging from as big as basketballs and boulders to the size of small cars, sheriff’s Lt. Jeff Allison said.

One of her dogs was found alive inside her house but two others remain missing, Allison said.

The woman’s family did not immediately respond to phone calls or text messages seeking comment.