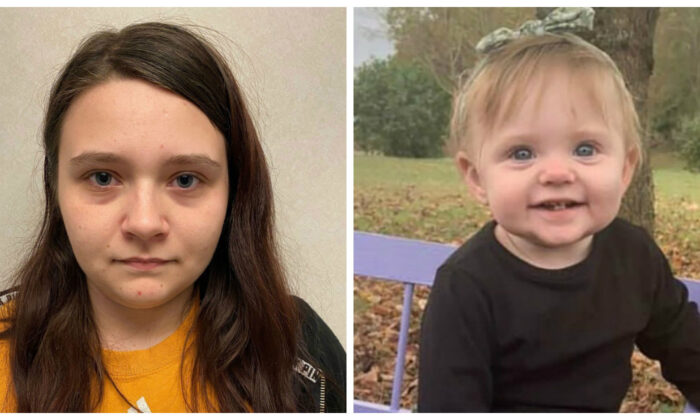 BLOUNTVILLE, Tenn.—Remains believed to be that of a 15-month-old girl were found in Tennessee, ending the 17-day search across three states for a missing toddler, authorities said.

At a press conference Friday night, the Tennessee Bureau of Investigation and Sullivan County Sheriff’s Office said they believe they found the remains of Evelyn Mae Boswell earlier that evening. An Amber Alert was issued more than two weeks ago, but authorities have said she hadn’t been seen since at least December.

“This is certainly not the update we had hoped to provide this evening,” TBI spokeswoman Leslie Earhart said.

The remains are being sent for autopsy and positive identification, Sheriff Jeff Cassidy said. He said authorities acting on a tip found the remains on a property in Blountville that is owned by a relative of Evelyn’s mother.

Evelyn’s mother, Megan Boswell, 18, was arrested Feb. 25 on a charge of filing a false report. Authorities said her inaccurate and conflicting statements had impeded the investigation.

She initially told state investigators that Evelyn was with the child’s father, Ethan Perry, according to court documents from her arraignment. But Perry is stationed with the U.S. Army at Fort Polk, Louisiana, and did not have Evelyn, WJHL-TV reported.

Megan Boswell later said her mother, Angela Boswell, took her daughter to a campground in Mendota, Virginia, not far from Tennessee’s Sullivan County. Authorities searched multiple campgrounds in that area and found no sign of the girl, the TV station said.

Angela Boswell herself was arrested the week before her daughter was taken into custody. She and her boyfriend, William McCloud, were arrested in North Carolina on fugitive warrants unrelated to Evelyn’s case, authorities had said. Authorities looking for Evelyn searched a pond in the county where they were arrested.

Angela Boswell told a judge in North Carolina that she wanted to go home and resolve the situation with her granddaughter, news outlets reported at the time. She was subsequently returned to the Sullivan County jail a day before her daughter joined her there, and arraigned on a theft charge.

Bail for Megan Boswell remains at $25,000 after a judge rejected a request to lower it from her lawyer, who cited her lack of a previous criminal record. The lawyer waived a preliminary hearing and the case was sent to a grand jury, with her next appearance scheduled for early May.

“Based on what’s happened tonight, there’s a lot of work to be done: forensically and just old-fashioned investigative work,” Staubus said.

She Was Reported Missing Months After She Was Last Seen

The TBI said it received at least 890 tips in connectiFon to the case. But authorities eventually determined there had been no credible sightings, a spokesman with the sheriff’s office said.

“We’re conducting the investigation and obviously we’ve been talking to as many people as we’ve come in contact with that knew about the child,” Sullivan County Sheriff’s Office spokesman Capt. Andy Seabolt had told CNN affiliate WCYB at the beginning of the search. “We want to know why the child was not reported missing earlier.”

“We pray every day she is found, in good health and can be brought back and taken care of,” her great-grandfather, David Jones, told WCYB.