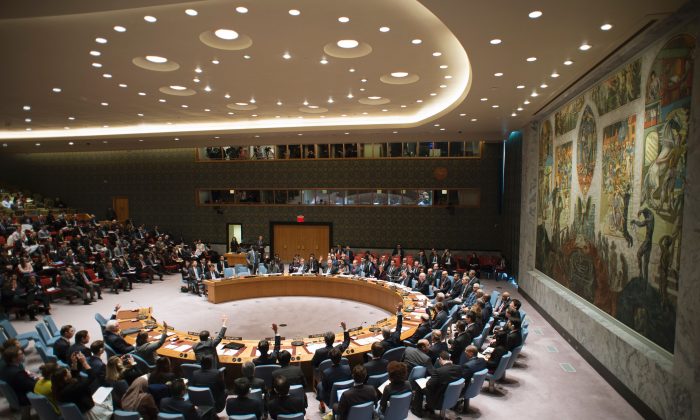 The U.N. Security Council votes during a meeting on sanctions against North Korea at the United Nations in New York on March 2, 2016. (Don Emmert/AFP/Getty Images)
Asia & Pacific

The U.S. is overwhelmed with global challenges, North Korea or South China Sea, and fails to connect long-term strategy dots

NEW HAVEN—Watching North Korea again test an atomic bomb and long-range missile within four weeks of each other is like a repeat visit to a movie. The U.N. Security Council slaps enhanced sanctions on Pyongyang, actions that won’t be implemented or observed, much like New Year’s resolutions. China’s disapproval is spun as a new “turning point” by the United States, supposedly because Beijing has finally lost patience with its ally.

The real intent of these moves is to get the North Korean tests out of the media spotlight—thereby removing pressure to come to grips with what is developing in Northeast Asia.

Yet it would be a mistake to think that a “same old, same old” policy is playing out again. In my book on “The Second Nuclear Age,” I emphasized the need for distinguishing between urgent problems, and those that were important but not necessarily urgent. Seen this way, the Middle East and ISIS are urgent challenges. They are immediate, play into the news cycle, and frankly, are what the vast majority of U.S. attention focuses on.

Then there are important issues that are less urgent. North Korea could go on for a long time before something dire happens. The likelihood of an attack on South Korea or Japan appears no greater today than it did one year ago, or five years ago. We could be wrong, but it is reasonable to judge that while North Korea’s nuclear missile buildup isn’t good, it also isn’t urgent. Most likely the problem will be passed on to the next administration, or kicked down the road beyond that.

Yet these important but not necessarily urgent problems contain the seeds of a potentially larger disaster and can grow into a deadly menace that is ultimately impossible to ignore. A North Korea with 30 atomic bombs in the 2020s is one plausible outcome. A North Korean nuclear ICBM could hit South Korea, Japan, or the United States.

North Korea’s safety and reliability standards are the worst of any nuclear weapon state in history. If Pyongyang ever fired this weapon, it might not work, many have argued. True enough. But then again, it might. Talk about deterrence. Nuclear shakiness is part of North Korea’s strategy—a type of deterrent unseen during the nuclear diplomacy of the Cold War. Then, the forces had enough reliability so that the nuclear head games and bluffs could be managed without fear that some small glitch would produce a devastating explosion.

Whether deliberate or irrational on the part of the Kim dynasty, this is some serious strategy innovation, going beyond Western imagination and culture. Most nuclear strategy in the West still derives from the Cold War and has developed little during the second nuclear age. Can anyone seriously maintain that North Korea only seeks deterrence via possession of a secure second strike force? Everything we know about North Korea points to a different strategic concept than Cold War–style deterrence.

The common view in Washington decision-making circles is that there’s little that can be done about North Korea, except for China pulling back support from its recalcitrant ally. More urgent problems in the Middle East push North Korea off the agenda.

Real policy is a mix of urgent crises and intuitions. Short-term concerns drive out long-term thinking.

And this is one way that North Korea’s recent nuclear and missile tests matter. They expose a large failure in policy imagination for the United States: an inability to distinguish between the urgent issues like the Islamic State (ISIS), and those that are important but not necessarily urgent, like North Korea. One danger of being the sole superpower is getting overwhelmed by immediate, urgent issues while other important issues are repeatedly kicked down the road.

Real policy is a mixture of urgent crises, and the intuitions of the moment when they arrive. Short-term concern drives out the long-term thinking every time.

This is what’s happened with North Korea, and more broadly in the Pacific. There are statements about the new power centers, China and India, as well as the return of Russia. There was the so-called pivot to Asia. Then, the overwhelming attention and intelligence returns to the urgency of the Middle East.

This tendency to see problems with a strong bias toward the urgent even shapes how the United States frames strategic issues in the Pacific. In game theory, there’s the Colonel Blotto game: Two opponents allocate forces among several battlefields. They do this to build advantage so they can win the overall war. Or they maneuver and threaten across battlefields to increase tension and risk. This is to increase their opponent’s caution and restraint for fear of an unwanted explosion of some kind, whether political or military.

North Korea is one such “battlefield,” a front in a Colonel Blotto game, in a larger strategic game between the United States and China. Other fronts include Taiwan and the new manmade islands in the South China Sea. The United States tries to negotiate about each individually, in isolation from the others.  For example, the manmade Chinese islands are handled with a B-52 flyover, a freedom of navigation operation naval patrol, and some unsuccessful maneuvering in ASEAN to remove the problem from its agenda. Likewise, North Korea’s recent tests are handled by more meaningless sanctions and diplomatic maneuvering in the United Nations.

What this approach—dealing with each North Korean danger as a North Korean issue—overlooks is game theory’s central insight that connecting individual strategies across the fronts creates an altogether more effective approach. China’s placement of surface-to-air missiles on some islands raises the risk of an escalation with the U.S. patrols and overflights. This increasing risk keeps the United States from pressing too hard on North Korea.

If the United States could get China to play as if these fronts were three independent issues, this would clearly be to Washington’s gain. But China sees that negotiating a three-way shell game gives it a greater advantage than dealing with one shell at a time. Should the United States escalate in any one front, China can counter not only in the immediate front of contention, but in the others as well. It can cross parry a U.S. move in one, with a Chinese move in another. This shell game can go on indefinitely.

The United States will get whipsawed by its approach of attending to each challenge in terms of immediate urgency. If Washington, for example, continues its naval guerilla war in the South China Sea, Beijing will tolerate more outrageous North Korean behavior. It will build more missiles against Taiwan, conventional and nuclear, to keep the United States off balance.

Focusing on the urgent misses the bigger picture. Understanding the big picture was how the United States won the Cold War without it turning hot. The United States understood the rules of the game. New rules for a second nuclear age are forming now, and understanding them is the important lesson of North Korea’s recent tests.

Paul Bracken is a professor of management and political science at Yale University. Copyright © 2016 YaleGlobal and the MacMillan Center. This article was originally published on YaleGlobal Online.