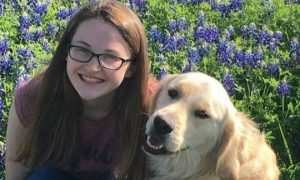 Two bodies were discovered in shallow graves in Oklahoma, and officials identified them as a Texas man and woman who went missing in early January.

The bodies of Jenna Scott, 28, and Michael Swearingin, 32, were found on a property in Okufuskee County, reported KFOR-TV.

They were last seen in Temple, Texas, on Jan. 4.

The missing woman from Temple had previously filed a protective order against someone she had been in a relationship with and was "terrified of," according to court documents.

“The preliminary investigation leads detectives to believe that the bodies recovered are that of Jenna Scott and Michael Swearingin,” said Temple police in a Jan. 15 statement

The causes of death for Swearingin and Scott are not clear.

“We have two subjects, at this time, yes that we’ve recovered,” Okfuskee County Undersheriff R.L. Wilbourn told KFOR. “We had some information, and we started looking for a certain area, we were able to find it with help from other agencies.”

A homicide investigation is currently underway after their remains were found.

Temple Daily Telegram reported that Swearingin and Scott were last seen at around 3 a.m. Jan. 4 in a gray Hyundai Genesis. The vehicle was found in Austin, Texas.

“The Oklahoma State Medical Examiners Office will be responsible for making the positive identifications at autopsy. The Scott and Swearingin families have been notified of this preliminary identification,” said the Temple Police Department.

“In order to protect the integrity of this ongoing investigation, no further information will be released at this time,” said officials.

The area was described in local reports as secluded. They were found near E 1140 Road, around five miles east of State Highway 27.

“I just get up every morning and put one foot in front of the other, and hope for the best,” relative Jonathan Scott told KXAN last week. “A lot of ups and downs. A lot of emotion. “There’s points of time where we just break down and cry, but, of course, sometimes we feel hopeful.”

UPDATE: Ex-boyfriend of missing Temple woman also dated Minnesota woman who has been missing since 2009

In another incident, Scott’s ex-boyfriend Cedric Marks, 44, was arrested on a burglary charge in Michigan last week, the station reported.

Marks was not a person of interest in their deaths, but he was accused of breaking into her Temple home in August 2018.

Police in Minnesota confirmed on Jan. 15 to KCEN-TV that Marks is a person of interest in the 2009 disappearance of April Pease, his ex-girlfriend.

He was never named as a suspect. Pease was last seen in Bloomington, Minnesota.

“April Pease was reported missing to our agency in September of 2009. The case has been open since that time, and all leads actively investigated. We are aware of the developments in Texas regarding another missing person’s case, and have been in contact with local law enforcement in that jurisdiction,” said Bloomington Police Chief Mike Hartley in a statement.

“We will continue to follow up on any new information that may be pertinent or related to the disappearance of April Pease.”

Marks is awaiting extradition from Michigan to Texas.

Marks appears to be a former mixed martial arts fighter. On several MMA websites, including Sherdog.com, there is a listing for 44-year-old Cedric Marks, who is also known as  “Spider-Man.” He last fought in promotion RXMMA – Rocks Xtreme MMA 23 in March 2018.