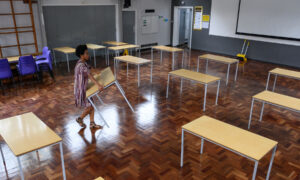 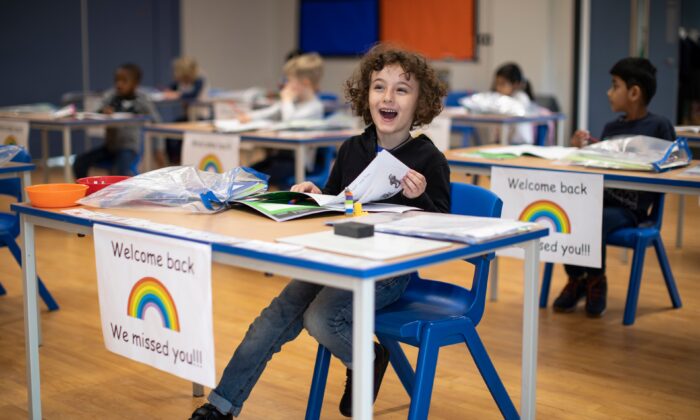 Children sit at individual desks during a lesson at the Harris Academy's Shortland's school in London on June 4, 2020. (Dan Kitwood/Getty Images)
UK

Risks From Missing School Are Worse for Kids Than Virus: UK Medical Officers

Missing out on their education poses much bigger risks to children than catching the CCP virus, the UK’s chief medical officers have said in a joint statement in support of the government’s decision to reopen schools after the summer holidays.

In an unusual move, the chief medical officers and deputy chief medical officers of England, Scotland, Northern Ireland, and Wales issued a “consensus statement” on Saturday on the risks and benefits of schools reopening following lockdown measures imposed in March to curb the spread of the CCP (Chinese Communist Party) virus, also known as the novel coronavirus.

“Our overall consensus is that, compared to adults, children may have a lower risk of catching COVID-19 (lowest in younger children), definitely have a much lower rate of hospitalisation and severe disease, and an exceptionally low risk of dying from COVID-19,” the chief medical officers said in the statement.

“This has to be set against a certainty of long-term harm to many children and young people from not attending school,” they said, adding “a lack of schooling increases inequalities, reduces the life chances of children and can exacerbate physical and mental health issues.”

“The international real-world evidence suggests that reopening of schools has usually not been followed by a surge of COVID-19 in a timescale that implies schools are the principal reason for the surge,” the chief medical officers pointed out.

In a BBC interview aired on Sunday, professor Chris Whitty, the UK’s chief medical adviser and England’s chief medical officer, said the chances of children dying from COVID-19 are “incredibly small,” but missing lessons “damages children in the long run.”

“Many more were likely to be harmed by not going than harmed by going [to school],” he said.

A new study released by Public Health England on Sunday shows CCP virus outbreaks and infections in schools are rare.

Since year 1, 2, and 6 pupils returned to school in June amid the initial easing of the lockdown measures, only 0.01 percent of pre-schools and primary schools had an outbreak, all of which were successfully contained and just 70 children and 128 staff were affected.

Schoolchildren have a higher risk of catching the flu or being involved in a road accident than catching the CCP virus, England’s deputy chief medical officer Dr Jenny Harries told Sky News on Monday.

On Monday, Prime Minister Boris Johnson made a direct appeal to parents to return their children to the classroom when schools reopen next week.

“It’s vitally important that we get our children back into the classroom to learn and to be with their friends,” he said in a statement, as “nothing will have a greater effect on the life chances of our children than returning to school.”

Earlier this month, Johnson said reopening schools in September is a “moral duty” and a “national priority.”

“Keeping our schools closed a moment longer than absolutely necessary is socially intolerable, economically unsustainable and morally indefensible,” he wrote in The Mail on Sunday.

England’s Children’s Commissioner also said schools should be “first to open, last to close” in any future UK lockdowns, even at the expense of other sectors.