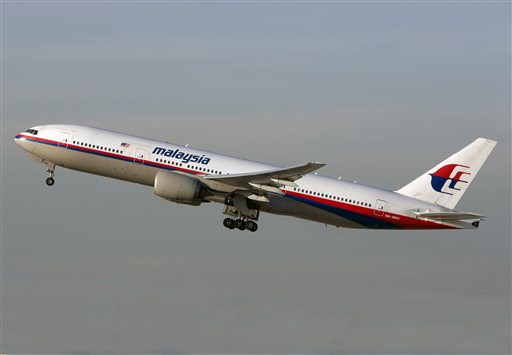 In this Nov. 15, 2012 photo, a Malaysia Airlines Boeing 777-200 takes off from Los Angeles International Airport in Los Angeles. The plane, with the tail number 9M-MRD, is the same aircraft that was heading from Amsterdam to Kuala Lumpur on Thursday, July 17, 2014 when it was shot down near the Ukraine Russia border, according to Anton Gerashenko, an adviser to Ukraine's interior minister. (AP Photo/JoePriesAviation.net)
Asia & Pacific

A book is claiming that the pilot of missing Malaysia Airlines Flight MH-370–Zaharie Ahmad Shah–may have killed himself and committed mass murder by crashing the plane.

To New Zealand-based authors, Geoff Taylor and Ewan Wilson, published a book “Goodnight Malaysian 370,” which claims Zaharie may have flown Flight 370 to the southern Indian Ocean before sinking it intact, according to New Zealand-based Stuff.co.nz

The two also claim Zaharie–described as a highly skilled and competent pilot–may have intentionally made the missing airline nearly impossible to locate to get a twisted form of self-satisfaction. Wilson and Taylor posits that it would have been the “the ultimate post-mortem triumph.”

The book was released on Amazon Kindle on Monday, and a hard copy comes out on Aug. 10, reported Stuff.co.nz.

Malaysia Airlines Flight 370, which was traveling from Kuala Lumpur to Beijing, disappeared on March 8. It had 239 people on board, who are presumably dead.

Australian, Malaysian, and Chinese vessels have attempted to search for the aircraft in a section of the Indian Ocean, but turned up nothing.

“We were able to completely rule out any possibility of catastrophic structural failure, rapid depressurisation, electrical failure, fire or being shot down as possible causes for MH370’s loss,” said Wilson, who also has transport air investigation qualifications,” said Wilson, who was a former pilot and chief executive of two airlines.

He added: “They simply couldn’t have happened. Through a process of elimination, we were left with the uncomfortable and very tragic likelihood that Zaharie – because of some personality disorder, depression or emotional breakdown – killed himself and everyone on the aircraft deliberately.”

The two authors also claim Zaharie shut co-pilot Fariq Hamid out of the cockpit before closing down all communication before turning the plane around.

The passengers and crew then died from a lack of oxygen, they said.

Australian officials have said monthslong hunt for the Malaysian airliner that vanished off the Australian coast will not be interrupted by the top search official’s new job in recovering bodies from the downed airliner in Ukraine.

Angus Houston heads Australia’s Joint Agency Coordination Center, which oversees the search for Malaysia Airlines Flight 370 that is believed to have crashed in the Indian Ocean on March 8 after mysteriously veering far off course during a flight from Kuala Lumpur to Beijing.

The former Australian defense chief was in the Ukrainian town of Kharkiv on Wednesday as the prime minister’s special envoy to receive the bodies of Australian victims of Malaysia Airlines Flight 17. The aircraft was shot down last week by a suspected surface-to-air missile fired by Russian-backed rebels, with the loss of 298 lives.

“We remain fully committed to conducting a thorough undersea search of the likely impact zone in the Indian Ocean,” Truss said in a statement.