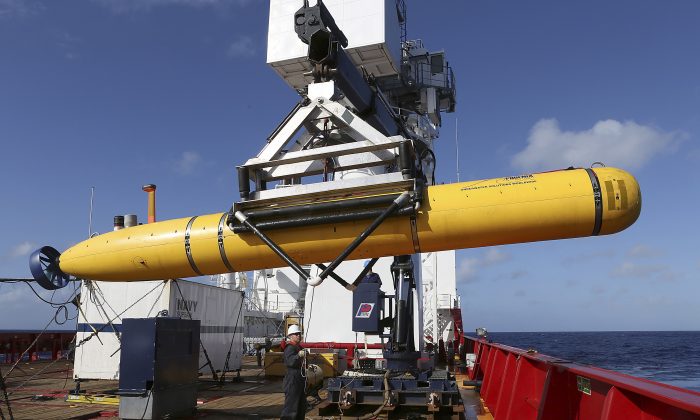 In this Thursday, April 17, 2014 photo provided by the Australian Defense Force the Phoenix International Autonomous Underwater Vehicle (AUV) Artemis is craned over the side of Australian Defense Vessel Ocean Shield before launching the vehicle into the southern Indian Ocean in the search of the missing Malaysia Airlines Flight 370. Up to 11 aircraft and 12 ships continue to scan the ocean surface for debris from the Boeing 777 that disappeared March 8 en route from Kuala Lumpur to Beijing with 239 people on board. (AP Photo/Australian Defense Force, Bradley Darvill) EDITORIAL USE ONLY
Asia & Pacific

The ships, according to CNN, are searching the Bay of Bengal but haven’t found anything.

“We haven’t found anything yet, and the frigates will continue the search until they verify all available information,” Commodore Rashed Ali, the head of Bangladeshi navy intelligence, told CNN.

An Australian company says it received a tip that the plane might be found in the area.

Malaysian Transportation Minister Hishammuddin Hussein also said he is considering sending a ship to search the Bay of Bengal.

The official search area is in the southern Indian Ocean, hundreds of miles from the west coast of Australia.

“But I just want to stress that by doing that, we are distracting ourselves from the main search,” he said on Friday. “And in the event that the result from the search is negative, who is going to be responsible for that loss of time?”

Australian company GeoResonance claimed that it may have located the plane’s wreckage in the Bay, saying that it’s not sure if the debris is from the missing flight.

“I am confident that the area in the southern (Indian) Ocean is the right search area, and I’m sure that in … some time, we’ll find the aircraft in that area of the Indian Ocean,” GeoResonance chief coordinator Angus Houston said.

Malaysia Airlines on Thursday called on the relatives of passengers to leave hotels and return home to wait for the news, The Associated Press reported.

Malaysia airlines said it would establish family support centers in Beijing and Kuala Lumpur. According to NBC News, Malaysian Airlines officials are looking to start compensation talks with the families of those who were on the plane.

No wreckage from the plane has been found, and an aerial search for debris ended on Monday.

Officials have warned that the search could take as long as a year to complete.

SYDNEY (AP) — An international panel of experts will re-examine all data gathered in the nearly two-month hunt for the missing Malaysia jet to ensure search crews who have been scouring a desolate patch of ocean for the plane have been looking in the right place, officials said Monday.

Senior officials from Malaysia, Australia and China met in the Australian capital to hash out the details of the next steps in the search for Malaysia Airlines Flight 370, which will center on an expanded patch of seafloor in the Indian Ocean off Western Australia. The area became the focus of the hunt after a team of analysts calculated the plane’s likeliest flight path based on satellite and radar data.

Starting Wednesday, that data will be re-analyzed and combined with all information gathered thus far in the search, which hasn’t turned up a single piece of debris despite crews scouring more than 4.6 million square kilometers (1.8 million square miles) of ocean.

“We’ve got to this stage of the process where it’s very sensible to go back and have a look at all of the data that has been gathered, all of the analysis that has been done and make sure there’s no flaws in it, the assumptions are right, the analysis is right and the deductions and conclusions are right,” Angus Houston, head of the search operation, told reporters in Canberra.

Investigators have been stymied by a lack of hard data since the plane vanished on March 8 during a flight from Kuala Lumpur to Beijing. A weekslong search for surface debris was called off last week after officials determined any wreckage that may have been floating has likely sunk.

“Unfortunately, all of that effort has found nothing,” Australian Transport Minister Warren Truss said. “We’ve been confident on the basis of the information provided that the search area was the right one, but in practice, that confidence has not been converted into us discovering any trace of the aircraft.”

Houston has warned that the underwater search may drag on for up to a year.