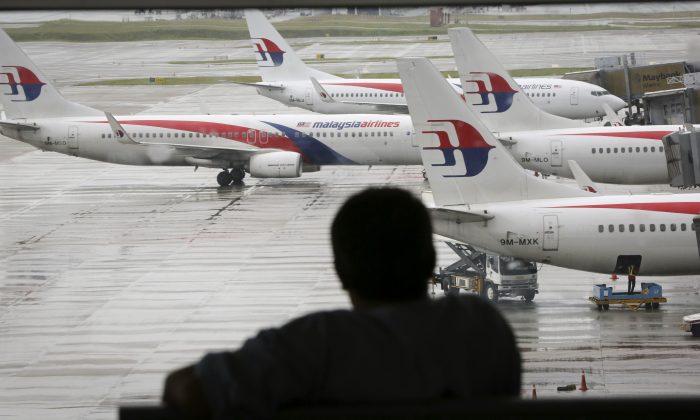 A visitor looks out from the viewing gallery as Malaysia Airlines aircraft sit on the tarmac at the Kuala Lumpur International Airport (KLIA) in Sepang, Malaysia, Tuesday, May 27, 2014. The Malaysian government on Tuesday released 45 pages of raw satellite data it used to determine the flight path of the missing jetliner, information long sought after by some of the relatives of the 239 people on board the plane. (AP Photo/Vincent Thian)
Asia & Pacific

A book is claiming that the passengers on Malaysia Airlines Flight MH370 died after being deprived of oxygen when the pilot of the plane “deliberately” turned off the supply before he crashed the aircraft into the sea.

It also claims that Shah locked out his co-pilot from the cockpit before he ditched the jet in the sea, according to The Mirror.

Malaysia Airlines Flight 370 disappeared in early March with 239 passengers on board.

Wilson said that the “most likely scenario” is that Shah depressurized the plane’s cabin, which would deprive those on board of oxygen. Air masks that drop from the plane only last for about 20 minutes.

Those on board the plane would have then lost consciousness before dying of oxygen deprivation, or hypoxia.

The same theory was also posited by the Australian Transport Safety Bureau a few months ago. Malaysian officials also named Shah as the primary suspect in their investigation.

“One of our objectives in writing this book was, in some small way, to convey the human stories of the tragedy,” Wilson wrote. “Our other, more important task was to pursue the truth about what really happened; that is one small contribution we felt we could make to this whole, terrible affair.”

The claims come as reports said there was targeted phishing attack on Malaysian officials involved in investigating the disappearance of Flight 370. The attack may have caused them to leak sensitive information to presumably Chinese hackers, according to RT.com, a Russian state-run broadcaster.

Amirudin Abdul Wahab, chief executive at CyberSecurity Malaysia, said that “those email(s) contained confidential data from the officials’ computer, including minutes of meetings and classified documents. Some of these were related to the MH370 investigation.”

He added that the hack was probably related to disappearance of the plane, as there were about 153 Chinese nationals on board. There’s been frustration from the families of the missing passengers.

The plane was heading from Kuala Lumpur to Beijing on the night of March 8.