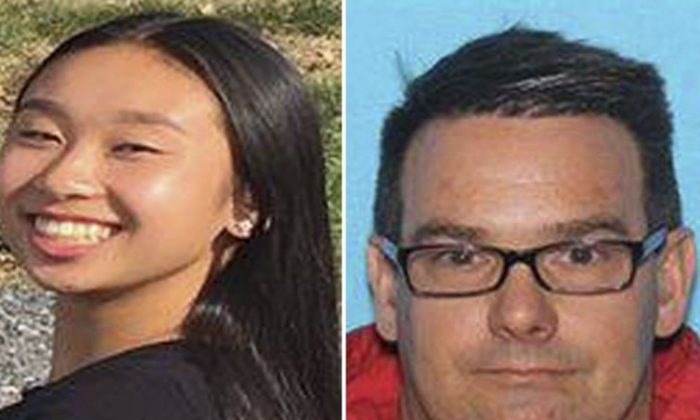 Missing Pennsylvania Teenager and 45-Year-Old Man Are Likely in Another Country by Now: Police

The Pennsylvania teenager who was signed out of her school by a 45-year-old man has likely been taken to another country, authorities said in the latest update.

Amy Yu, 16, was taken from her school in Allentown by Kevin Esterly on Feb. 9.

Yu is friends with one of Esterly’s daughters, with Amy’s family saying the pair met initially at church years ago. He is married with four children.

School records showed that Yu was signed out of school by Esterly, who was listed as her stepfather, 10 times between Nov. 13 and Feb. 9.

Yu’s mother reported her daughter missing on March 5, reported The Morning Call. Esterly’s wife told police officers that she saw him that morning for the last time. He withdrew $4,000 from his wife’s bank account before vanishing.

The pair disappeared after being seen last that day at 15th and Allen streets, shortly after Yu’s mother dropped her off at a bus stop.

Amber Alert Mexico posted an alert on Thursday night asserting that Yu and Esterly are now in Mexico and urging people to be on the lookout for them.

Authorities believe that Yu could be in danger.

“From investigations it seems she is traveling on national territory in the company of Kevin Esterly,” Amber Alert Mexico said in its tweet. “It is believed that the integrity of the teenager is in danger and she may be a victim of crime.”

Esterly has a warrant out for his arrest on the charge of interfering with the custody of a child. Authorities said the pair struck up a romantic relationship at one point but 16 is the age of consent in Pennsylvania.

Where is Amy Yu…Who is Amy Yu? Tonight at 10, we sit down with her former youth pastor, who tells us the reason he thinks Amy went with 45yo Kevin Esterly in the first place, and why he believes the teen will WANT to come home soon. @69News #AmyYu #Allentown pic.twitter.com/3dLR6piF6w

“If she’s safe—that’s okay. But I want them to catch the guy and bring her back,” Miu Luu told ABC.

“His daughter is a friend and just one year younger than Amy. I never thought he would act like that. I know him from the church and I know his family for years.”

While Yu has asserted that Esterly tricked her daughter into leaving, others say the teen helped plan the escape.

A female mentor in Amy’s youth group told WFMZ that Amy posted Snapchat messages in the days before she vanished that said things like “I’m done with this place,” or “I’m done with people who don’t like me.”

“I think they know or they planned it, to do this and I think it was both of their ideas because Amy is not that stupid,” he told CNN.