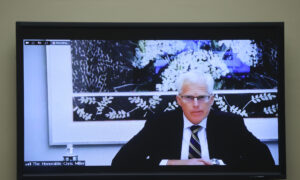 Police found Wilmoth,28, early Friday morning after a week-long search for her. Police took Ruska, 37, who held Wilmoth against her will according to authorities, into custody.

LeeAnn Wilmoth went missing Sunday after going on a fishing trip with Eric Ruska according to Det. 1st Lt. Robert Pernaski of the Michigan State Police.

“They approached the truck and identified him,” said Pernaski, he added that Wilmoth was in the vehicle and made it clear to troopers that she was being held against her will reported the Escanaba Daily Press.

Wilmoth was taken to UP Health System-Marquette for evaluation reported WLUC TV6.

Pernaski noted Wilmoth was healthy with no apparent physical trauma.

Ruska was sentenced to prison in 2004 for a third-degree criminal sexual conduct and kidnapping according to public records. He was released December 2015.

“It worked out well in the end though it took longer than we had hoped. It’s over,” said Pernaski.

“First and foremost, we would like to thank God for hearing the prayers of so many of LeeAnn’s loved ones and bringing her home to us. We’d also like to thank Detectives Jay Peterson and Jeremy Hauswirth as well as every other law enforcement officer involved in locating our sister! There are no words to express how extremely grateful we are for your tireless efforts to locate LeeAnn. Our heartfelt gratitude goes out to the residents of the Upper Peninsula for searching alongside us, we were truly humbled by the amount of strangers willing to saddle up and ride out in search of LeeAnn. Lastly, we’d like send a huge thank you to all of our friends and family across the nation. A lot of messages, phone calls, and emails went unanswered on our end, but believe me when I say, we felt your love and support!”

“To Eric Ruska, while we understand you suffer from a sickness, you have taken something from your victims they will never get back, their innocence. While this may have changed our lives and LeeAnn’s life forever, we are strong, she is stronger and we will rise! However, we will make it our mission that you never have the chance to harm another innocent woman again.”

“To the media both social and local, thank you for spreading the word, LeeAnn’s pictures, and helping us bring her home! We ask that you consider her recovery in the days to come and keep praying for her strength!”