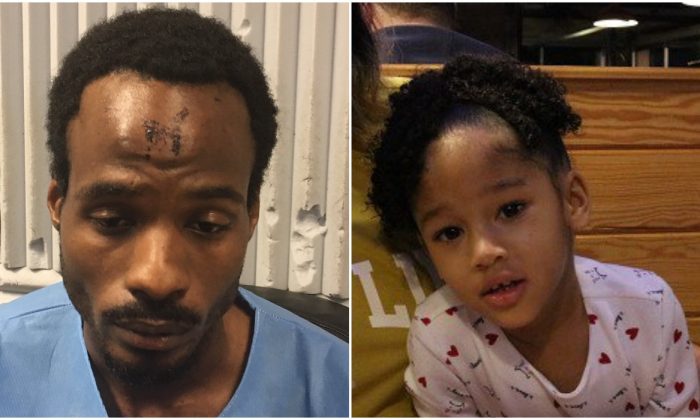 Maleah Davis and her stepfather Darion Vence, pictured with a mark on his forehead after he said he had been abducted with his daughter. (Houston Police Department)
Crime and Incidents

Missing 4-year-old Maleah Davis, whose stepfather reported her kidnapped over the weekend, was removed from mother’s care last summer and returned to her in February, according to reports.

Police announced a missing Amber alert for Maleah Davis on May 5 after her stepfather said she had been abducted by three men in a pick-up truck who knocked him unconscious when he pulled over on a Houston highway.

They were driving to the airport on the evening of May 3 to meet Maleah’s mother Brittany Bowens.

According to Fox News, Child Protective Services (CPS) confirmed that Maleah and her two brothers, aged 5 and 1, were removed from their mother’s care in August 2018, over concerns of possible physical abuse.

A judge ordered her to be returned to her mother, along with her two siblings, in February, reported Fox.

Her mother on Monday pleaded for the public to help: “If’s there anybody that can help me, please, please,” she said, according to KPRC. “I just want to find my baby.”

Her grandmother, Brenda Bowens, said: “If she’s listening to this, I want you to know that Nana loves you and I promised to take you to Lake Charles and I still want to do that. I want to fulfill my promise that I told you the other day. And I miss you and I love you.”

Maleah’s stepfather, Darion Vence, said he had been heading to the Intercontinental Airport in Houston with two children to pick up the girl’s mother when he pulled over on U.S. 59, Sergeant Mark Holbrook told a news conference on May 5.

“He hears a popping noise like he has a flat tire,” Holbrook told reporters.

Three men got out of the blue Chevy truck, and two began to engage with him.

“One of them makes a comment saying, ‘Maleah looks very nice, looks very sweet,’” Holbrook said. “The other male hits Darion [Vence] in the head.”

According to Holbrook, Vence says he woke briefly to find himself in the back of the truck with the three men and his two children, before passing out again.

Vence’s next recollection is finding himself on Highway 6 in Sugar Land, according to police, at around 6 p.m, with his 2-year-old son Kourtland. He said the three men had gone with Maleah.

According to Holbrook, he spent around four hours walking the highway—because no one came to his aid—until he eventually went to the Houston Methodist Hospital between 10 and 11 p.m. and then reported Maleah as missing.

“I realize there’s a lot of blanks in that story, but we’re hoping that the public fill in the blanks,” Holbrook said.

Bowens waited for Vence at the airport, according to police, but when they failed to show up she did not report him missing until the following morning.

Police later issued a photograph of Vence showing a mark on his forehead, hoping that people may recognize him since he cannot recollect almost 24 hours.

He is not considered a person of interest in the case by police, according to the Houston Chronicle.

Police have released images of a likeness of the suspected kidnapping vehicle—a blue, crew-cab Chevy truck.

Maleah is described as having black hair and brown eyes, standing approximately 3 feet tall and weighing 30-40 pounds. She was last seen wearing a light blue Under Armor jacket, blue jeans, and gray Under Armor tennis shoes with pink and white details.