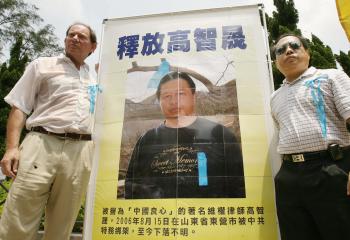 A Vice-President of the European Parliament has said that missing Chinese human rights lawyer, Gao Zhisheng must play a role in the future of a free China.

“Gao Zhisheng must be part of the future of a reformed and democratic China,” said Edward McMillan-Scott, a Vice-President of the European Parliament and Founder of the EU's democracy and human rights initiative.

“[Mr. Gao’s] devotion to the cause of justice and a fair legal system brought him into national prominence as a lawyer,” said Mr. McMillan-Scott after learning that the respected Chinese lawyer had been honoured with the International Human Rights Lawyer Award from the American Bar Association on Friday August 6.

The annual award is given to lawyers well-known for taking on human rights cases and who have in turn, suffered persecution because of their efforts.

“This award is one of many which make Gao indispensable for China’s future,” said Mr. McMillan-Scott.

Since April this year there has been no word of Mr. Gao’s whereabouts or his wellbeing, and it is believed he is being secretly held by the Chinese police.

A dedicated Christian, Mr. Gao was self-educated and would go on to be described by Chinese officials as one of China's ten best lawyers. He was well known for his work in assisting China’s poor and marginalized, but he met the wrath of Chinese state security once he began defending the rights of persecuted Falun Gong practitioners.

In December 2004, Mr. Gao sent the first of three open letters to Chinese Communist Party leaders — President Hu Jintao and Premier Wen Jiabao — which described his investigation into the state’s persecution of Falun Gong. His next two letters would include descriptions of extreme methods of torture used by Chinese police during their attempts to force practitioners to denounce their faith.

“His criticism of the repellent and corrupt Beijing regime in his open letters gave him a wider audience as a statesman,” said Mr. McMillan-Scott.

“His examination of the persecution of the Falun Gong spiritual movement and his trenchant criticisms of the regime which set them in train mark him out as a true prophet,” he said.

“His captors should learn from recent European and world history: democracy and human rights will triumph.”

For his letters, the Chinese state shut down Mr. Gao’s law firm and took away his license to practice. Mr. Gao and his family also faced continued harassment and intimidation from security agents. In August 2006, he was taken by secret police and later convicted of “subversion.” A subsequent jail sentence was suspended and he was placed under house arrest and monitored.

In the lead up to the 2008 Olympics he wrote an open letter to the US Congress stating that China’s human rights situation was worsening. Subsequently he was taken into police custody for several months and tortured to the point where he considered suicide. After being released he revealed via a statement what he had experienced in custody, despite being warned by police that if he did so he would be killed. His family fled China in January 2009 and a month after this, Mr. Gao was again abducted by police and went missing for more than a year.

In April this year, Mr. Gao resurfaced and gave several restricted media interviews and it was believed he was being closely monitored by police. At the end of that month he was reported missing again, he is now thought to be in police custody.

Mr. McMillan-Scott has been a long time campaigner for reform and democracy in China and was in contact with Mr. Gao before he disappeared. According to his website, in May 2006, Mr. McMillan-Scott visited Beijing on a fact finding mission and all the Chinese with whom he had contact with were arrested, imprisoned and in some cases tortured.