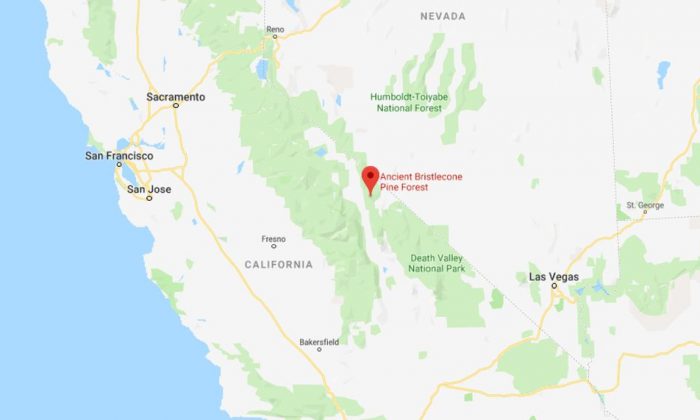 A California woman who went missing for four days has been found alive, according to her family and investigators.

Farrah Powell, the daughter of missing woman Sheryl Powell, wrote on her Facebook page on July 15: “SHES ALIVE!!! This is the happiest day of our lives. We can’t thank everyone enough!!!!!!!”

She posted a photo of her mother and her family in the hospital.

She went missing days before that on Friday afternoon at the Grandview Campground near the Ancient Bristlecone Pine Forest. Her husband, Joseph, told the local Inyo County Sheriff’s Office about his missing wife, and officials described her as an “experienced hiker.” The Ancient Bristlecone Pine Forest is located near Big Pine in eastern California near the Nevada border.

“After searching for almost an hour, Mr. Powell alerted law enforcement through his satellite device,” the office said on Facebook, adding that her dog also went missing as well.

“We’re grateful that Mrs. Powell and her dog were found alive and well. Our office is actively investigating the circumstances surrounding her disappearance. We have no further information at this time,” the office wrote at 6 p.m. local time on Monday.

When Powell was located, searchers said she was “exhausted after being lost in an extremely remote” part of southeastern California.

Her son, Greg, wrote on Facebook that she was threatened by a man wielding a knife who allegedly told her that “you’re going to do what I want or I’m going to take my knife to your dog.” She ran away after she believed he was going to sexually assault her, Greg wrote.

“He chased her down the hill and she ran away,” he was quoted by the Sacramento Bee as saying. “She was too scared to take the normal path because she thought he was following her. That’s why she wasn’t where they expected her to be.”

“When she figured she had lost him she also realized she was quite lost,” Greg wrote in the post. “Thankfully she is strong and resilient and knew how to find water (despite no map, phone, or overt knowledge of the area).”

Greg said Powell managed to find water and a cactus to eat but couldn’t walk any longer after a while. She only traveled at night, he said.

She “still got dehydrated and when she could no longer walk she scooted as far as she could,” he said.

He added, “She tried to leave [her dog] Miley leashed near the stagnant water but she refused to be left alone and broke out of her leash and stayed near my mom.”

When Powell was found, he said her first words were to her family were “I’m so sorry I put you through that you guys must have been so worried.” Greg said it just proves “how selfless she is.”

The area where she went missing is part of the White Mountains area, located east of the Sierra Nevada range and northwest of Death Valley National Park, the Bee noted. Grandview Campground is at an elevation of 8,600 feet.

It features ancient bristlecone pine trees, which are more than 4,000 years old, making them among the oldest living organisms in the world.