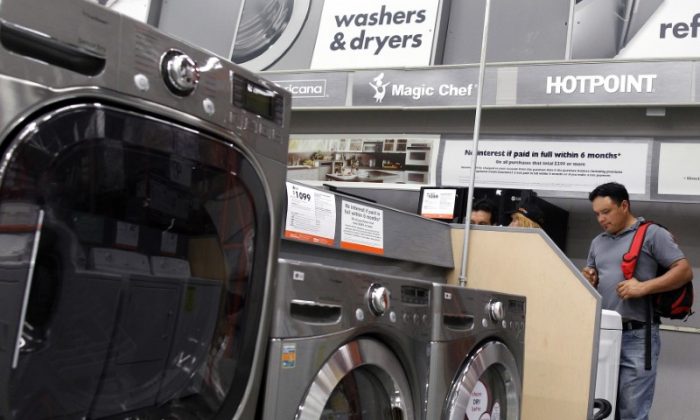 Shoppers look at washers and dryers at a Home Depot store in New York, July 29, 2010. (Reuters/Shannon Stapleton)
US News

A 2-year-old Georgia girl was found dead inside a dryer and officials said her cause of death was heat-related.

According to News4Jax, the toddler died on Sunday in Brantley County. The Georgia Bureau of Investigation said she died of hyperthermia, or overheating.

A close family friend told the news outlet that the toddler was discovered in the appliance.

Sources told WNYT that the mother discovered the toddler in the dryer, and she believes the girl went inside when she was sleeping.

Williams said that he doesn’t think the mother would intentionally harm the child.

“It’s just an awful tragedy. She’s a good girl. She’s a good mom, takes care of her kid, goes to work. She does the right thing,” Williams told News4Jax. “For something like this to happen in our neighborhood is just awful.”

No arrests have been made. An investigation is ongoing.

Other details about the case were not disclosed.

Several years ago, a mother of three claimed that her young daughter was sucked into a spinning tumble dryer and had a warning for other parents.

The girl, Iiylah-Louise Johnstone-Evans, who is nearly two years old, was playing when she opened the dryer’s door and got her finger caught on a blanket as it spun round and round, mother Shannon Johnstone-Evans wrote on Facebook.

Shannon, 24, heard the girl’s screams and turned the dryer off as the girl’s head was pulled in the spinning apparatus at their Somercotes, UK, home.

“I was in the kitchen cooking the kids dinner to hear iiylah screaming sic,” she wrote, adding that “it was quite muffled.”

The toddler was hospitalized due to the accident.

She received treatment for tissue damage to her fingers on her right hand at King’s Mill Hospital in Nottinghamshire, the SWNS news agency reported.

“I managed to get her out and unwrap the blankets,” she wrote on Facebook, adding that the “cotton was wrapped [around] her finger” and was “cutting the circulation.”

Read More
Daycare Closing After Toddlers Wandered Off, Found on Busy Highway
Toddler Survives After Falling on an Iron Rod That Skewered His Chest
‘My Sissy’: Toddler Meets Newborn Sister and It’s Clear He’ll Be the Best Big Brother
Idaho Officer Rescues Toddler With Life-Threatening Injuries During Traffic Stop
Missing Toddler Found Safe in Missouri Cornfield With Pet Dog by Her Side

Johnstone-Evans said when the girl was being pulled, “it felt like everything was just taking ages.”

The experience proved to be traumatic for the girl, who is 23 months old.

“The next day, we put her to bed as normal, but at around 7 p.m. she started screaming again,” Johnstone-Evans said. “She was shaking all over and started vomiting repeatedly. The doctors reckon it must be some sort of seizure, perhaps brought on by shock. Thankfully she is all ok now and on the mend.”

At the end of her Facebook post, the mother offered a warning to others, saying: “I want to mainly warn parents how dangerous tumble dryers are.”