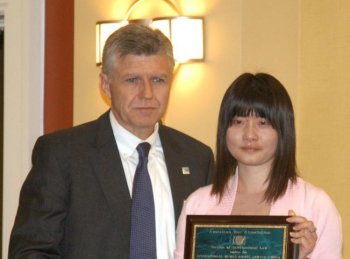 The annual award is given to lawyers well-known for taking on human rights cases and who have in turn, suffered persecution because of their efforts.

Coming from an impoverished background, Mr.. Gao was self-educated and would go on to be described by Chinese officials as one of China's ten best lawyers. A dedicated Christian, he was well known for his work in assisting China’s poor and marginalized but he met the wrath of Chinese state security once he began defending the rights of persecuted Falun Gong practitioners.

“Because of that work, his law license was taken from him in 2005,” said an ABA posting on the International Law Prof Blog. “In 2006, he was charged with subversion and sentenced to house arrest. In 2007, just before the Olympics, he wrote a letter to the US Congress to explain the human rights situation. He was arrested and reportedly tortured for a period of almost 60 days,” said the ABA posting.

“He told a journalist about that experience and said that the loss of dignity made him feel as if he was nothing but an animal. His family was also arrested and allegedly tortured. His wife and two children were able to escape from China in a harrowing journey to the U.S. Embassy in Thailand, and later arrived in the United States last year.”

Mr. Gao’s current whereabouts are unknown and there are concerns for his well-being and safety. In 2007 the English translation of his memoir A China More Just was published, and in 2007, 2008, and 2010, Mr. Gao was nominated for the Nobel Peace Prize.

In December last year ABA President Carolyn B. Lamm wrote to US Secretary of State Hillary Clinton describing the conditions that lawyers face in China and asked the US State Department to step up its activities to help protect Chinese lawyers.

With more than 400,000 members the American Bar Association, is the largest voluntary professional association in the world.