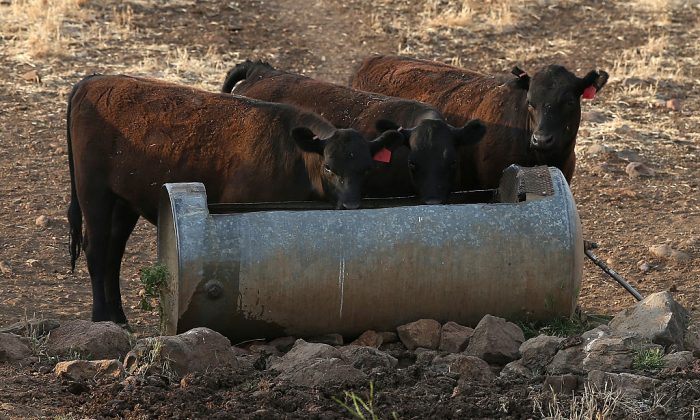 Cattle drink water from a trough as they graze in the hills. (Photo by Justin Sullivan/Getty Images)
US

A woman who went missing from from her home was found Aug. 4 surviving on bugs and water from a cattle trough. The Modesto, California, woman told authorities that she ate two grasshoppers and one fly, according to a report by AP.

Jamie Tull, 33, was discovered emaciated, sunburned, and lying in a farming community field. She was missing for over two weeks after a car crash. She had been off her psychiatric medication for even longer. She told rescuers she did not want to be found.

After Tull went missing, her parents sent out 200 volunteers to go searching for the former public elementary school teacher. They also set up a website, www.helpfindjamie.com, and offered a $100,000 reward.

Search teams used helicopters, bloodhounds, and people on foot according to a Modesto Bee article. Despite the exasperating effort the search continued. If she wasn’t found that day search efforts would have lessened.

She was eventually found by three men on foot who weren’t sure if she were dead or alive when they saw her lying there with her knees up. The each of the three fathers imagined it was his own daughter he was searching for.

“Had she been in the field another 20 feet we would have never found her,” said Robert Carpenter, one of the three and a man who works for Tull’s father.

On July 17 Tull called her husband while driving. She then crashed into a ditch. She was found about half a mile from where her car crashed. Her cellphone was found near the cattle trough. She used a water tank for shade.

“Give me food and water and let me go,” was what Tull said to law enforcement and paramedics after being found, according to Merced County Sheriff Vern Warnke.

“She hunkered down. She didn’t want to be found,” said the sheriff. Tull was missing for 17 days. Fliers with a picture of her smiling face were placed around the area.

Tull was taken by helicopter for medical treatment on Aug. 4 and will be returned to her family, according to the AP report.

Sheriff Warnke said Tull told him she was trying to get to Yosemite when he arrived. Yosemite 60 miles from the crash site in Le Grand, Merced County.

Tull’s father said she has bipolar disorder and stopped taking medication six months ago. He said it was because a pastor and his wife told her medication leads to demons, as reported by Fox 40.