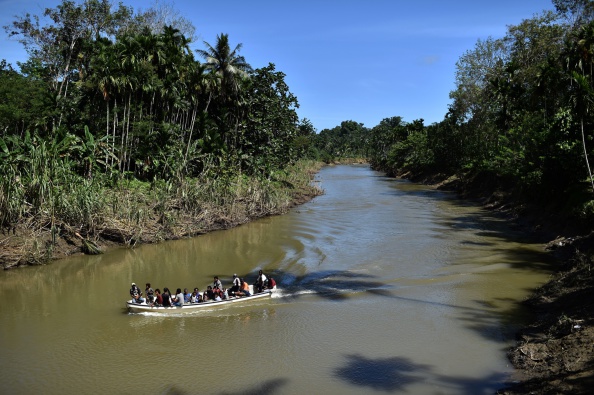 People travel by boat on a river near the village of Tora, in the jungle of Papua New Guinea, in this file photo. British explorer Benedict Allen was due to catch a flight back to the UK from the country on Sunday, November 12, 2017. (Aris Messinis/AFP/Getty Images)
UK

A British explorer who went missing in a remote jungle in Papua New Guinea is alive and has been flown out of the jungle on Friday, Nov. 17, according to reports.

Benedict Allen’s agent, Jo Sarsby, told the BBC that Allen was spotted at a remote airstrip in Enga Province on Thursday.

A helicopter was sent out to him on Friday, as the airstrip is not accessible via road, according to his agent. The explorer was flown out of the jungle to the island’s capital, Port Moresby and is expected home on Sunday. It is reported that he is being treated for suspected Malaria.

The 57-year-old travelled solo to Papua New Guinea in early October on a quest to find the reclusive Yaifo tribe for a BBC documentary, The Telegraph reported. He was due back on Sunday, Nov. 12.

The father-of-three went with no means of communication and was dropped by helicopter at an abandoned mission station in Bisorio to find the Yaifo tribe, who he describes on his website as the “last people on the entire planet” who are out of contact with the world. He met with the tribe once 30 years ago.

“No outsider has made the journey to visit them since the rather perilous journey I made as a young man three decades ago. This would make them the remotest people in Papua New Guinea, and one of the last people on the entire planet who are out-of-contact with our interconnected world,” he wrote on his website in September.

He added, “Just like the good old days, I won’t be taking a sat phone, GPS or companion. Or anything else much.”

His family have warned he will get “a severe ticking off” when he arrives home.

Speaking with the Mail Online, Allen said, “I was seriously worried I wouldn’t get out of this one.”

His friend, BBC correspondent Frank Gardner, tweeted that Allen is recovering from a fever that may be Malaria.

Gardner told The Sun, “I’ve got to say I’m quite annoyed with him as his friend. He left with no plan, he had no evacuation plan, he didn’t give anybody any idea of where he was going.

“It’s hardly surprising that he’s missed his flight and he’s caused a lot of people to be very worried about him. People who care about him.”

His wife Lenka Allen said, “Just tell him to get home—now. Get home as soon as you can, because the kids are desperate to see you.

“We have been having sleepless nights, and everyone has been thinking about him.”

In October, Allen tweeted a photo with the text, “Marching off to Heathrow. I may be some time (don’t try to rescue me, please – where I’m going in PNG you won’t ever find me you know…)”

Marching off to Heathrow. I may be some time (don't try to rescue me, please – where I'm going in PNG you won't ever find me you know…) pic.twitter.com/BmH1DKdheS

His brother-in-law told the newspaper there will be a “family fracas” when he returns home.

“His ethos of going without modern technology is a cause for concern. We have to accept it but it causes us all a great deal of worry.

“Benedict and his wife and children are coming to us for Christmas, you can be sure my sister will be giving him a severe ticking off,” he said.