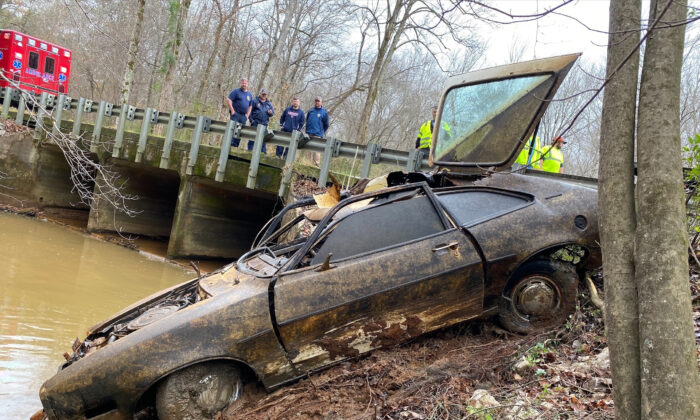 The 1974 Pinto Kyle Clinkscales was driving when he disappeared in 1976, is recovered from a creek in Alabama in December 2021. (Maj. Terry "Tj" Wood/Chambers County Sheriff's Department via AP)
Crime and Incidents

LAGRANGE, Ga.—An Auburn University student disappeared after leaving his job at a Georgia bar one night in January 1976, and authorities long believed he was murdered. But the only person ever convicted went to prison for years for making false statements about a killing that may never have happened.

Nearly a half-century after the disappearance, the open hatch of a 1974 Pinto became visible in the murky water of an Alabama creek. It was Kyle Clinkscales’ car, and the Georgia Bureau of Investigation will now analyze about 50 bones found inside, including part of a skull, a Georgia sheriff said.

“We may never know” how the 22-year-old died, Sheriff James Woodruff of Troup County said at a news conference after the car was pulled from the creek on Tuesday near Cusseta, Alabama. He said Clinkscales could have accidentally run off the road, about three miles off the interstate between his job and campus, but he’s not ruling out foul play.

Neither is Donny Turner, whose office interviewed about 75 people in the case when he was sheriff from 1993 to 2012. He told The Associated Press on Thursday he remains confident Clinkscales was the victim of a homicide, that Jimmy Earl Jones was there and that Jones was correctly prosecuted for lying to investigators.

Clinkscales was from LaGrange, near the Georgia-Alabama state line and about 45 miles from Auburn. He disappeared after leaving the LaGrange Moose Club, where he worked as a bartender, at around 11 p.m. on Jan. 27, 1976, to return to school.

His parents prayed for information about their son until they died—his father in 2007 and his mother this year. They offered rewards, consulted psychics, provided DNA samples, and had a brief, false glimmer of hope in 1981 when a man in Oregon claimed he had amnesia and might be their son, according to news reports.

The investigation has started and stalled several times over the years, and authorities say Jones’ initial silence and later inconsistencies complicated things. AP tried to reach Jones and the lawyer who represented him for comment but was unable to locate either of them.

One tipster, in 1996, pointed to a man who was a friend of Jones, saying that man knew where the body was. Investigators drained a 5-acre lake near the man’s property, but they found nothing. Jones’ friend denied any involvement, and Jones stayed mum. Investigators didn’t have enough evidence to bring charges.

Then, in 2005, a man called Clinkscales’ parents, saying that when he was 7, he witnessed the disposal of their son’s body, covered with concrete in a barrel and dumped into a pond. He said his cousin was involved in trying to get rid of the body.

The cousin denied it but said he heard a gunshot and witnessed Jones and the friend dragging someone away, Turner said. The pond was drained, but a body was not recovered.

When questioned by investigators in 1996 and in 2005, Jones failed to disclose that he was a witness to Clinkscales’ killing and later gave conflicting statements, authorities said.

Investigators talked to Jones many times, and his attorney was involved, Turner said.

“He knew we were not trying to railroad him,” Turner said.

Investigators charged Jones in April 2005 with concealing a death and hindering the apprehension of a criminal. He pleaded guilty a year later to two counts of false statements.

Jones said during his plea hearing that he was at his friend’s property that night when Clinkscales showed up, expected to bring money owed to someone else. Jones said his back was turned when he heard the two men arguing, and then heard two shots.

“When I turned around, I was in shock. And we carried him and put him in the shop,” Jones said, according to a hearing transcript.

Judge Allen Keeble agreed to delay his sentencing because his plea agreement depended on his testimony against a woman who Jones claimed had been there at the killing.

When Jones reappeared for his sentencing in August 2007, authorities were exasperated.

District Attorney Pete Skandalakis told the judge he had called Jones to his office before presenting the case against the woman to a grand jury, and when asked again if the woman had been there when Clinkscales was killed, Jones said she was not. The planned indictment fell apart.

“I questioned him further, and finally, he told me that he would say anything that I wanted him to say, which was of no use to me, Your Honor, because I wanted only the truth,” Skandalakis said.

The prosecutor said Jones had told still another story right after his arrest in 2005: That he had gone to get beer that night in 1976, and returned to his friend’s property to see Clinkscales wounded on the ground. Jones said his friend said he shot him accidentally, and that he helped him carry Clinkscales, still alive, into a shed, and never saw him again.

“Based on all the inconsistent statements this defendant has given, the State is of a position that his testimony is absolutely useless to us,” Skandalakis told the judge. Nevertheless, the prosecutor continued to support the plea deal for four years in prison, followed by four years on probation.

Clinkscales’ mother wanted a stiffer punishment, blaming Jones for his silence and inconsistency that “continues to hinder the recovery of my son’s body so that I may give him a Christian burial,” according to a statement she wrote that Skandalakis read aloud at the sentencing. She asked the judge for “the maximum allowable sentence.”

Jones’ attorney, Julianne Lynn, told the judge her client didn’t intend to mislead and tried to help. She acknowledged his false statements, but said his culpability in any crime beyond that “is in question by everybody.”

The victim’s family and community had been “torn by this for so many years,” she said, but she urged the judge not to act on emotion. Jones was 65 years old by then, had no prior criminal record and just wanted to get back to his road work job. She asked for his release, crediting him for time served.

There was no real evidence that Jones was involved in killing Clinkscales, but his false and inconsistent statements added to Clinkscales’ parents’ anguish and misery, the judge said.

After the car was recovered, Skandalakis said in a phone interview that the “most plausible explanation” is that Clinkscales accidentally ran off the road, but it’s possible he was killed elsewhere and placed there. Either way, Jones deserved prison for the pain he caused by muddying the investigation, he said.

Turner, the former sheriff, said he can’t “imagine anybody going to court and pleading guilty to something and telling his part of the story that didn’t do it.”

By Sudhin Thanawala and Kate Brumback