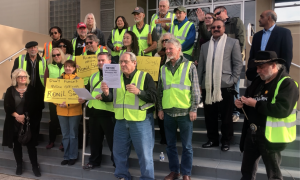 Sheriff’s officials said she was found dead on March 25 near Dominguez Hills industrial park in Compton, California, about three days after she was last seen, reported KTLA.

The station, citing investigators, reported that the 15-year-old girl was found face down and hidden in the bushes.

BREAKING NEWS: A body found in an industrial area of Compton has been identified as a 15-year-old girl, investigators said.

Bustos also suffered a “traumatic” injury to her upper body before her death, said officials, without elaborating on the injury. Her cause of death also wasn’t released, pending an ongoing investigation.

Sheriff’s department officials are now trying to obtain surveillance video footage from a business near where her body was discovered.

Susan Lainez, her cousin, said she was with friends on the afternoon of March 22 in Compton, but she never made it back home.

Just In: A 15-year-old girl who had been missing since Friday has been found dead in Compton.

“They believe it happened sometime Saturday evening,” said Andy Miller, executive vice president at the National Retail System, a business located near where she was found, according to KTLA.

“I got a call early this morning that they had found a body on the perimeter of the property,” Miller also said. “We’re cooperating with the police in every way possible. They asked for [security] camera footage over a period of time.”

By midnight on March 23, her cellphone was shut off after repeated calls were not answered. She was officially reported missing by her family on March 24, officials said.

“Day and night, we drove around everywhere looking for her and nothing,” said Bustos’ uncle, Junior De Jesus, in the KTLA report.

“They found her and I don’t know what to say. I don’t have words,” Blanca Bautista, the girl’s mother, told NBC Los Angeles.

Her mother said she was last seen in a white Jeep with two young men.

“They just hurt her, that’s what he said. They hurt her bad,” Bautista said, without elaborating.

“I had contact with her best friend, she was asking me if she came home,” Victor Lopez, Bustos’ cousin, elaborated to ABC7. “We couldn’t find her and we started looking for her Saturday morning.”

She was only 15!
A vigil for Samantha Bustos, she went out on Friday, her body was found with traumatic injuries face down by some bushes of an industrial complex in Compton. know something? Please say something @Univision34LA @LASDJUANITA @LASDHQ #SoloALasOnce pic.twitter.com/PVVa4eB4vi

Bustos’ grandmother said she was a good student and had a lot of friends while warning other young people to be careful, according to the ABC affiliate.

No suspects have been identified in the case.

Her family set up a GoFundMe page to pay for funeral expenses, saying, “We ask for your support to raise funds for her funeral expenses. We appreciate any donation. No donation is too small. Thank you.”

Friends & family of Samantha Bustos are holding a vigil in #Compton where her body was found early this AM. The 15-year-old went missing Friday afternoon. Investigators have not released a cause of death but say Samantha suffered a traumatic injury to her upper torso. @KTLA #RIP pic.twitter.com/kLxvIIkHMY