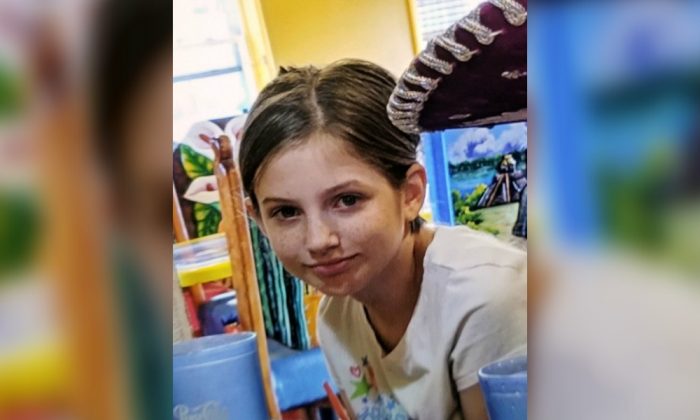 Skylea Carmack in a file photograph. Her body was found and her stepmother was arrested on a murder charge. (Gas City Police Department)
Crime and Incidents

An Indiana woman has been arrested and charged with murder after law enforcement found the body of a missing 10-year-old on Sept. 4.

“Unfortunately, this morning at approximately 3 a.m., a four-day search for missing 10-year-old Skylea Carmack has come to a tragic end. Skylea’s body was located in a shed behind her Gas City home. She was hidden inside a plastic trash bag,” Sgt. Tony Slocum, public information officer for the Indiana State Police, said during a press conference on Wednesday.

Amanda Carmack, 34, Skylea’s stepmother, was arrested for the girl’s murder and also faces charges for neglect of a dependent resulting in death, strangulation, and domestic battery resulting in death. She’s being held at the Grant County Jail.

An autopsy has been scheduled to verify the cause of death.

The girl was initially reported missing by her stepmother, who went to the Gas City Police Department in person around 9 p.m. on Saturday. She said that she did not know where the girl, who was homeschooled, had gone. Skylea was last seen alive at her home.

“To try to rationalize why someone would kill a 10-year-old? There’s no rationale for that. It’s just an act of cowardice,” Slocum said.” I can’t wrap my mind around why you would want to kill a 10-year-old child. If you find yourself in that state of anger or whatever precipitated this event, step away. Do whatever you have to do to regain your composure. It’s just mind-boggling to me that anyone could injure or even eventually kill a young child.”

Evidence led to Carmack’s confession, he said. Police believe there was no one else involved in the murder. Father Kevin Carmack “was concerned that this could be an outcome,” Slocum said. “I imagine he was devastated. I wasn’t there when the news was presented.”

“As a parent, your worst nightmare comes true when a child you entrust someone to protect allegedly ends up being someone that causes them harm, maybe even their death,” he said.

“It’s a heartbreaking case to lose a 10-year-old life from this community,” he later added.

Community members helped police scour the area for the girl and Slocum thanked the community for their help, along with local media that spread the word of Skylea’s disappearance.

Kevin Carmack, Skylea’s father, spoke to RTV6 before his daughter was found, saying the search hadn’t turned up anything.

“We haven’t been able to find any tracks,” he said. “None of her belongings laid around anywhere, so right now, we’re just really in a panic because we can’t find anything.”

Carmack told Fox 59 that he left Skylea at home with his wife and six other children when he went to work Saturday and did not see her alive again.

The Gas City Police Department said at the press conference that there were no prior calls relating to a domestic disturbance at the home. There were nine people living at the house and the six other children were taken into the custody of Child Protective Services.