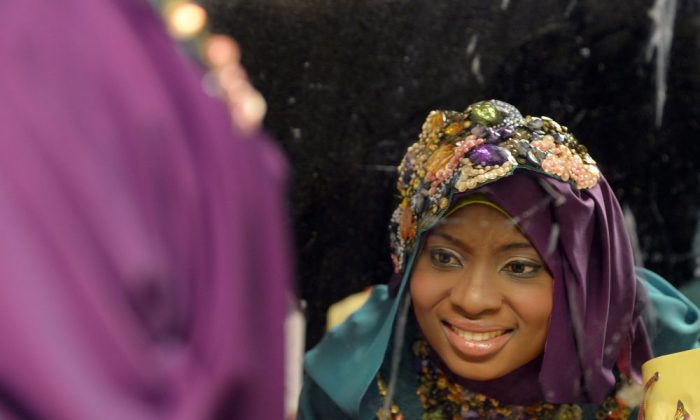 Contestant of the Muslimah World 2013, Obabiyi Aishah Ajibola of Nigeria, checks her make-up in a mirror while contestants wait for a grand final during the Muslimah World competition in Jakarta on September 18, 2013. (ADEK BERRY/AFP/Getty Images)
International

The Miss World Muslimah crown was handed to Miss Nigeria, Obabiyi Aishah Ajibola, in Jakarta, Indonesia, earlier this week, according to reports.

The beauty pageant was organized by the World Muslimah Foundation to respond to pageants like Miss Universe and Miss World.

The event is now in its third year and is exclusively for Muslim women.

Woman are assessed based on their faith in their religion, understanding of the Koran, their appearance, and other factors.

There are no “bikini contests” or similar contests. More than 130 contestants took part in the event.

“We are free and the hijab is our pride,” she said. She said it is “nothing like Miss World, where women expose their bodies.”

The pageant was started by Eka Shanti, lost was fired from her TV presenting job for not removing her headscarf.

“But it’s about more than Miss World. Muslim women are increasingly working in the entertainment industry in a sexually explicit way, and they become role models, which is a concern,” she said, according to AFP.

The only U.S. finalist, Ainee Fatima, said last week that she would not compete due to her father’s ailing health, according to the Huffington Post.