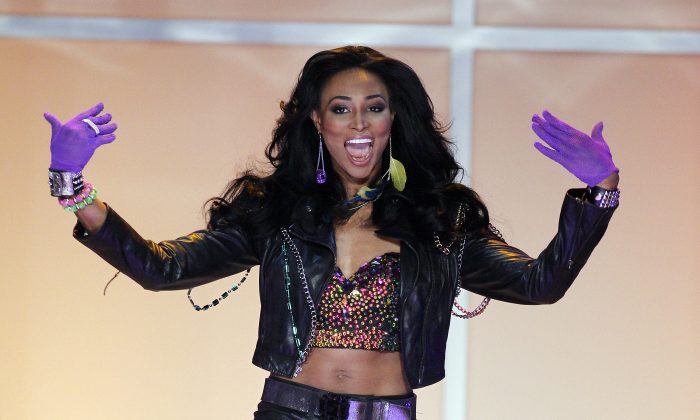 Who were the past winners? See here:

Meriwether is a two-time All-American athlete, having been a captain of the volleyball team at UCLA, and trained for the 2008 Olympics.

Meriwether grew up in South Africa, where she was born, and moved through many rural villages as her father was a medical missionary. She and her father founded a charitable organization, the Meriwether Foundation, which helps improve the health of communities in South Africa, Zimbabwe, Zambia, Malawi, and Mozambique.

She has also studied pre-medical as a graduate student at the University of Southern California, and at the moment resides in New York City.

Campanella, a model, used a portion of her time as Miss USA to advocate for breast and ovarian cancer treatment, a cause close to her because her grandmother was at one-time diagnosed with cancer.

Campanella was raised in Manalapan, New Jersey, where she acted in school plays and later recieved a scholarship to the New York Conservatory for Dramatic Arts in Manhattan. She dyed her hair red (it was blonde) for a role in 2005 and has since kept it red. Before winning the Miss USA competition, she was crowned Miss New Jersey Teen USA in 2007 and, after moving to Los Angeles, crowned Miss California in 2010.

Fakih, a native of Lebanon, moved to the Queens borough of New York City in 1993. She moved to Michigan to attend the University of Michigan, earning a Bachelor of Arts degree in Economics, while starting a mentoring program for children and serving as a class senator.

Fakih was crowned Miss Michigan in 2010 and helped raise awareness for women’s self-defense, as well as breast and ovarian cancer education, research, and legislation.

Her hobbies include traveling, running, dancing, and hanging out with her younger brother, as well as playing sports and watching football.

Dalton grew up in North Carolina, first in Cabarrus County then Wilmington. She graduated from East Carolina University with a degree in Psychology and Spanish.

Her acting career includes appearances in the television series “One Tree Hill.”

Stewart grew up in Missouri City and graduated from the University of Houston with a Bachelor’s Degree in Consumer Science and Merchandising, and has taught worked with people who have learning disabilities. She serves as a board member on Houston Community College’s VAST Program, which helps those with these disabilities learn. She also taught autistic children for a year at Elkins High School as a teacher’s aide.

Stewart began acting in the Tyler Perry series “For Better or Worse” after she met him at a restaurant, and appeared in the Perry movie “Good Deeds.”