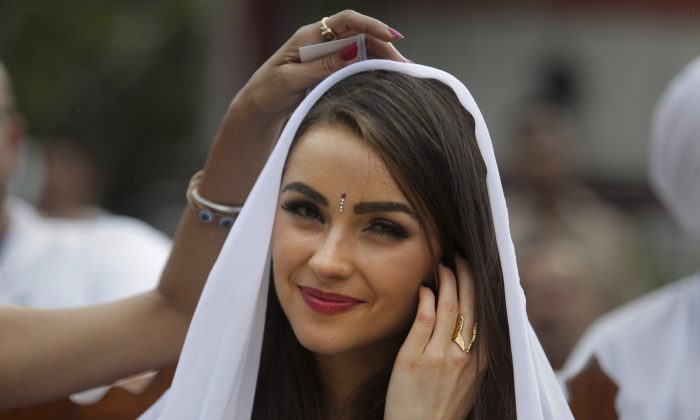 Miss Universe, Olivia Culpo of the USA, watches a performance by inmates as designer Sanjana Jon, adjusts her veil during a visit to the Tihar Jail in New Delhi, India, Monday, Sept. 30, 2013. (AP Photo/Tsering Topgyal)
India

Miss Universe Olivia Culpo has had a lawsuit filed against her for allegedly violating rules at the Taj Mahal on Oct. 6.

Local authorities are investigating whether Culpo violated rules at the famed landmark by advertising a brand of footwear during a photo shoot, reported NDTV.

After someone traveling with her took two sandals out of a bag, Culpo put one on her foot and held the other in her hand, while a cameraman took pictures with the Taj Mahal in the background.

Any kind of commercial activity is prohibited in and around “archaeologically protected monuments,” according to India’s Supreme Court.