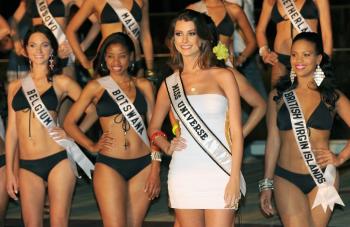 Hosted by NBC correspondent Natalie Morales and rocker Bret Michaels, the event will showcase 83 contestants from six continents in evening gowns, swim suits, and quick-thinking interviews before a star-studded panel of judges at the Mandalay Bay Resort & Casino.

Venus Raj, a 22-year-old representing the Philippines, has received the highest rating at 3.55 out of 5 on the official website from web users. She is followed by Bolivia’s Claudia Arce Lemaitre at 3.08 and Venezuela’s Marelisa Gibson at 2.98. Miss USA 2010 Rima Fakih is vying for the crown for the United States.

The competition first started in 1952 as a local “bathing beauty” competition in Long Beach, California held by Catalina Swimwear, according to the pageant’s website.

Tickets are still available for the award ceremony, ranging from $95.60 to $373.