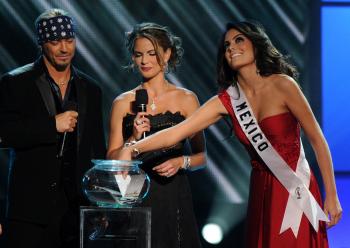 "I want the whole world to know about my country and my people," the Guadalajara native said through an interpreter after defeating 82 competitors at the Mandalay Bay Resort & Casino in Las Vegas. "I imagine that they're all going crazy in Mexico right now. I'm extremely proud and I'm sure they're very proud, too."

After presenting a flowing one-shoulder red dress and a violet bikini and commenting on adolescent Internet use, Navarette became Mexico’s second Miss Universe after Lupita Jones earned the title in 1991.

Navarrete has been modeling since she was 15. Before coming to Miss Universe, she won for Jalisco, then Mexico, the country's Nuestra Belleza pageant.

“Her victory is a source of pride and satisfaction for Mexicans, who see the fruits of perseverance in achieving our goals reflected in her,” said Mexican President Felipe Calderon in an official statement.

"We won, long live Mexico!" Navarrete wrote in Spanish on her Facebook fan page, which led to 1,102 “likes” and 334 comments as of Tuesday.

During the last round of the competition, Olympic gold-medal figure skater Evan Lysacek asked her about unsupervised Internet use, and Navarette said that parents need to pay close attention to their children.

"I do believe that Internet is an indispensable, necessary tool for the present time," she said, “and we must be very careful and watch over what our children watch and see, our teenagers watch and see. We must be sure to teach them the values that we learned as a family, so they may use Internet properly.”

While leaving the pageant, she was questioned by Spanish reporters about Arizona’s recent immigration law, which authorizes police officers to stop suspected illegal immigrants and ask for proof of citizenship.

"Every country has the right to impose and enact their laws, but I tell you that all the Mexicans and the Latinos that are living here in the United States are hardworking people—people who want to improve on their quality of life,” she said.