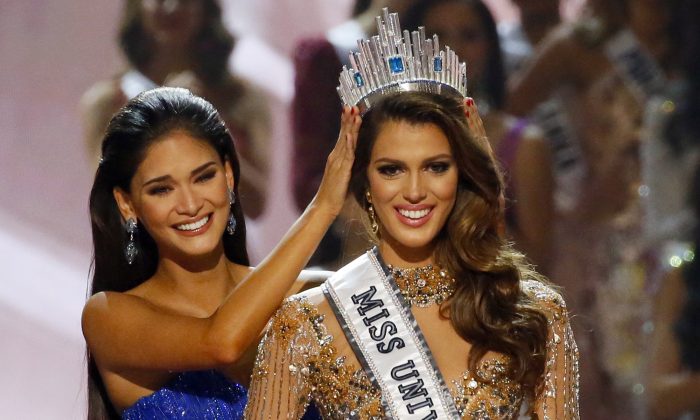 Iris Mittenaere of France is crowned the new Miss Universe 2016 by 2015 Miss Universe Pia Wurtzbach in coronation at the Mall of Asia in suburban Pasay city, south of Manila, Philippines on Jan. 30, 2017. (AP Photo/Bullit Marquez)
Entertainment

MANILA, Philippines—A 23-year-old dental student from France won the Miss Universe crown Monday in a pageant held in the Philippines, saying her triumph will make the beauty contest more popular in Europe and help her efforts to put more underprivileged children in school.

Iris Mittenaere from Lille city in northern France buried her face in her hands in shock and joy as the outgoing winner from the Philippines, Pia Wurtzbach, crowned her and the crowd erupted in cheers at the packed Mall of Asia Arena by Manila Bay.

As he closed the ceremony, the host, American comedian Steve Harvey, quipped, “I got it right,” referring to his mistaken announcement of Miss Colombia as the winner in last year’s pageant in Las Vegas. He was roundly criticized for the embarrassing error.

“One thing I learned in life, when you make a mistake, you gotta keep on moving forward man, that’s all,” Harvey said.

In her farewell remarks as outgoing winner, a smiling Wurtzbach thanked Harvey for making her “the most popular Miss Universe.” Harvey, laughing, thanked her for making him the “most famous” Miss Universe host.

Mittenaere’s victory was the first by a French contestant in more than 60 years.

“I think France and Europe really need a Miss Universe” after failing to win the crown for so long, she said at a post-pageant news conference when she was asked how her countrymen would receive her victory.

The contest has not been as popular in France as in other countries, she said, but “French people will love it now and every year they will be watching Miss Universe.”

Miss World Canada: ‘My Voice Was Not Being Heard’

“I’m very proud to bring this crown to Europe,” she said.

Mittenaere said her victory would also help cheer French people following terrorist attacks in recent years. “We need good news in France and I think this is very good news,” she said in response to a question from The Associated Press.

Mittenaere said she would focus during her reign on helping all children, especially girls, attend school.

Pellissier said surviving Haiti’s quake, which officials in her country estimated killed more than 300,000 people and displaced more than 1.5 million others, and her pageant success underscored her rise from adversity because she “chose to be a very positive person and learned a great lesson from it.”

“If I am here today, it is because I am living my dreams,” said Pelissier, who is studying for a master’s degree in optometry research. She had to raise funds to compete in the pageant after her sponsors pulled out to help victims of Hurricane Matthew, which devastated parts of Haiti in October.

Eighty-six candidates vied in this year’s pageant, which was formerly owned by Donald Trump.

A highlight was the national costume competition won by 24-year-old Myanmar model Htet Htet Htun, who carried a backdrop depicting her country’s traditional puppet theatre. At center stage, she stood before the frame and mimicked a stringed puppet to the crowd’s delight.

The contest was widely followed by Filipinos, known for their fascination with beauty contests, but their country came under the spotlight at a tough time. A deadly government crackdown on illegal drugs is underway and a major offensive against Muslim extremists in the south prompted extra tight security for the pageant.