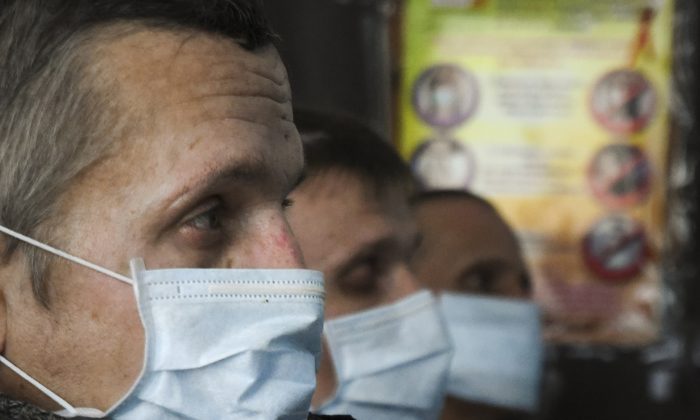 Prisoners of Zhdanivskaya prison listen to a lecture by a social worker in the village of Zhdanivka, eastern Ukraine. Medical supplies have been in short supply, threatening the lives of nearly 400 prisoners who need treatment. The principal scourge: Tuberculosis. The disease spreads prodigiously in jails and develops into hard-to-treat forms unless properly addressed. "TB is so common within the penitentiary system that many inmates don’t see it as a deadly disease _ they see catching TB as a normal part of life in prison," Doctors Without Borders said in a recent situation report. "Some even tell us they don’t care if they die or not." (AP/Mstyslav Chernov)
Europe

ZHDANIVKA, Ukraine—The colony of cats living on the grounds of the Zhdanivka penitentiary disappeared when battles in east Ukraine peaked. Talk in the prison is that inmates ate them when food deliveries stopped.

Medical supplies have also been in short supply, threatening the lives of nearly 400 prisoners who need treatment. The principal scourge: tuberculosis. The disease spreads prodigiously in jails and develops into hard-to-treat forms unless properly addressed.

“TB is so common within the penitentiary system that many inmates don’t see it as a deadly disease — they see catching TB as a normal part of life in prison,” Doctors Without Borders said in a recent report. “Some even tell us they don’t care if they die or not.”

The gray, squat, three-story building stands inside a perimeter lined with barbed wire and observation towers. Zhdanivka has since last year been under the control of the armed Russian-backed separatists who established the would-be breakaway state of the Donetsk People’s Republic. Supplies from the Ukrainian government have ground to a halt — and the ragtag rebel authorities have been at a loss to fill shortfalls.

Prison authorities allowed Associated Press journalists to visit the hospital at the Zhdanivka prison last week, albeit under close supervision.

The deputy prison director, dressed in a military-style uniform and seated under a black-blue-and-red Donetsk People’s Republic flag, coldly explained the rules: No walking without escort. No contact with prisoners. No filming of prison walls or towers. After being handed sanitary masks and passes, visitors entered detention wings while being followed closely by a prison minder.

The minder frequently restricted AP movements: “You cannot film there” … “Don’t go there, repair work going on” … “That employee is off-limits.” Most prisoners were friendly and happy to talk, but were prevented from doing so by wardens. “My folks probably think I’m dead by now,” says one prisoner, before the conversation is cut short by a minder.

The only prisoners unwilling to speak were in Block 3 — a group of around 70 who rejected medical treatment in protest who said they are afraid doctors are testing unregistered drugs on them.

Responsibility for treating inmates in the underfunded prison shifted as early as 2011 to organizations like Doctors Without Borders, known by its French acronym MSF. But the group’s role — and its burden — has grown sharply since war broke out last year. MSF says 170 patients under treatment at five pre-detention centers and jails in areas surrounding the conflict zone have developed drug-resistant TB.

Janette Olson, field coordinator of the MSF multidrug-resistant TB program, said prisoners are refusing to take drugs with unpleasant side effects, making long-term treatment complicated. MSF says that while the official death rate from tuberculosis in Ukraine is 15 per 100,000 people, the number is 10 times higher among prisoners.

A church built by prisoners sits behind the walls of the jail. Sick inmates go there daily to pray. Few distractions ease the monotony of life. Prisoners float like ghosts through the unlit corridors of the hospital and prison wards.

A sign on the door to the medical testing unit reads “Clinical Diagnostic Laboratory” against a blue-and-yellow Ukrainian flag. The minder rushed up to flip it around, as he did with other signs, because it shows allegiance to Ukraine. “We should have done this ages ago,” he said.

Larissa Zagrebayeva, the laboratory head, said she has been working in the prison for 36 years, and things have rarely been this grim. “Our staff has left,” she said. “They quit.”

Specialists have been forced into flight by unrest and the uncertainty of life under the rebel rule.

“We had two young bacteriologists, two young women … I might have to speak politics here,” she said, cautiously peering at the minder. “They went to Ukraine. And I am here alone.”

Unable to manage on her own, Zagrebayeva has come to rely overwhelmingly on MSF, which has been running tuberculosis and HIV prevention and treatment programs at the prison for the past three years.

The collection of specimens for tuberculosis tests is done through a glass window. On one side, a prisoner coughs up and spits phlegm into a jar, which he then passes through a small opening to a nurse on the other side.

In another wing, an MSF social worker in a surgical mask held consultations with prisoners due for imminent release. The aim of the talks is to help prepare inmates mentally for life on the outside and to emphasize the importance of further treatment.

“Those who survive are not the healthiest,” said MSF social worker Irina Vasilyevna, “but those with the strongest spirit.”

MSF works on both sides of the front line between rebel and government forces, giving them better access to patients than either Ukraine or rebel authorities have.

“Some have finished their sentence but are still not healthy, so our job is to make sure than when they are free,” Vasilyevna said. “They receive their full treatment and are cured completely.”

In countries battling TB outbreaks, prisons are a cause for special concern because they can serve as breeding grounds for the most resilient strains. Once outside, former convicts risk spreading their illness more widely.

Rebel areas are already ill-equipped to deal with the medical catastrophe triggered by a war that has killed more than 6,000 people, at a conservative U.N. estimate.

No official body has been tasked with gathering mortality data in separatist-held territory. But anecdotal evidence suggests that deaths have risen sharply among the elderly as a result of unrest exacerbating stress-related conditions. Weeks and months spent in damp and stuffy basements, cowering from shelling, have also spelled doom for those suffering from respiratory conditions.

Many prisoners who are released find themselves on the streets without money, spare clothes, documents or a home to go to. Without identification documents, it is difficult for them to leave rebel-held areas, so release from prison is a prelude to another entrapment.

While painting this picture, MSF worker Vasilyevna stopped mid-sentence as the minder approached with a curt suggestion that all such matters be discussed with the prison director.

“If it had kept on going on as before,” the worker said, “the patients would have started dropping like flies.”