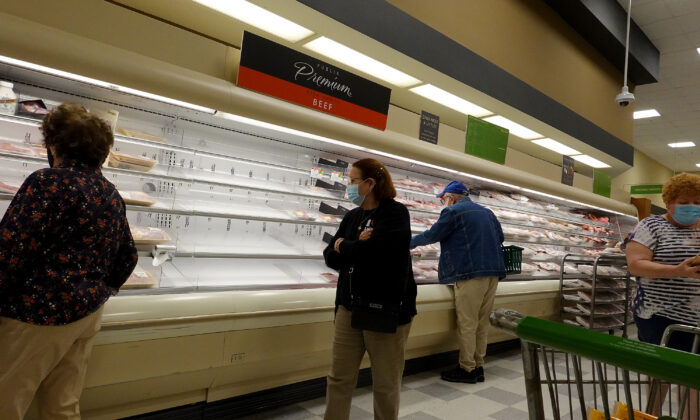 Shelves displaying meat are partially empty as shoppers make their way through a supermarket in Miami on Jan. 11, 2022. (Joe Raedle/Getty Images)
Economy

The misery index—a formula that combines the annual inflation and unemployment rates—has been elevated since April 2021. The decades-old index aims to measure the level of economic distress felt by average citizens due to joblessness and the rising cost of living.

It could be an effective gauge to determine economic conditions during a recession. The higher the index, the greater the misery felt by everyday people.

In July, the misery index was 12.0 (8.5 percent consumer price index and 3.5 percent unemployment rate). This is down from 12.6 percent in June. The index has remained in double-digit territory since April 2021.

What’s more is that the current misery index is close to where it was during the financial crisis of 2008 to 2009, when it peaked at 12.7 percent.

The index, however, has varied widely in prior recessions.

A Brief History of the Misery Index

The original misery index, which is calculated by adding the unemployment rate to the inflation rate, gained popularity in the 1970s with the emergence of stagflation, an economic state characterized by weak economic growth, high unemployment, and increasing prices.

It was developed by economist Arthur Okun, who served as the chairman of the Council of Economic Advisers between 1968 and 1969 under President Lyndon Johnson.

The misery index is regarded as a useful but imperfect indicator. There are various scenarios in which it may not accurately depict economic distress. Nevertheless, it’s used to compare the economic performance of U.S. presidents.

During Jimmy Carter’s presidency (1977–1981), the misery index hit 21.93, which was partially responsible for his 1980 election defeat. The index declined substantially during Ronald Reagan’s presidency and continued to fall under the Bush and Clinton administrations.

During George W. Bush’s presidency, however, the misery index rose again. It continued its upward trend, under President Barack Obama, peaking at 12.8 in 2011. The index later fell reaching its lowest point of 5 in 2015. It stayed low for most of Trump’s term. The index was 6.9 on average during the Trump administration, despite a sharp increase in unemployment caused by the lockdowns during the pandemic that sent the misery index to 15 percent in April 2020.

Over the years, economists have modified the index several times.

In 1999, for example, Harvard economist Robert Barro came up with the Barro Misery Index and added two additional components: the change in interest rates and the gross domestic product (GDP) growth rate.

Years later, Steven Hanke, a celebrated professor of applied economics at Johns Hopkins University, updated the index and created Hanke’s Annual Misery Index. This represents the sum of inflation, joblessness, and bank-lending interest rates minus the percentage change in real GDP per capita. He also applied it to the economies of other countries, constructing the world table of misery index scores.

“The human condition lies on a vast spectrum between ‘miserable’ and ‘happy,'” Hanke wrote in April 2021. “In the economic sphere, misery tends to flow from high inflation, steep borrowing costs, and unemployment. The surefire way to mitigate that misery is through economic growth. All else being equal, happiness tends to blossom when growth is strong, inflation and interest rates are low, and jobs are plentiful.”

In 2021, Cuba topped the list of misery, followed by Venezuela, Sudan, Lebanon, and Zimbabwe.

The Fate of Gloomy Consumers

A new poll from Gallup found that most Americans cite inflation and the economy as their top concerns.

“Consumer sentiment has plummeted alongside the increasing misery index, and this has often been the case in recent decades,” he reported. “Of course, economists and White House spokesmen could always just come back and claim that consumer sentiment is ‘wrong’ and that people don’t understand how good things are. It’s worth noting that politicians, central bankers, and economists have done exactly that during months preceding previous recession.”

So far, consumers’ economic worries haven’t weighed on their consumption patterns. Personal spending has edged up every month in the first half of this year, although the general increase in consumption has been driven by higher prices, from gasoline to housing to health care.

Nevertheless, market experts warn that this could change in the second half of the year, now that the personal savings rate has collapsed to just above 5 percent and consumer credit growth has surged. The trends suggest that pandemic-era savings might be close to exhaustion. The Federal Reserve Bank of New York’s Survey of Consumer Expectations shows that about 40 percent of households expect their financial situation to deteriorate over the next year.