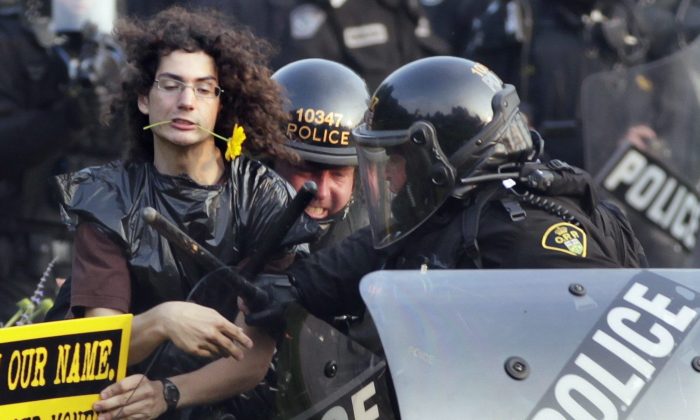 A protester with a flower clenched in his teeth is seized by riot police during protests at the G8 and G20 Summits in Toronto on June 27, 2010. A disciplinary hearing has begun for Supt. Mark Fenton, the most senior police officer charged in relation to the mass arrests during the summit. (AP Photo/Carolyn Kaster, File)
Canada

TORONTO—A disciplinary hearing is now underway for the most senior police officer charged in relation to the mass arrests during the G20 summit in Toronto four years ago.

Supt. David (Mark) Fenton has pleaded not guilty to a total of five charges of unlawful arrest and discreditable conduct stemming from two “kittling” incidents that occurred over the summit weekend.

Prosecution lawyer Brendan van Niejenhuis says the hearing comes down to the necessity and lawfulness of police orders that were issued and whether they constituted discreditable conduct.

Van Niejenhuis says he will present evidence that will show Fenton’s orders were indiscriminate and gave no regard to the conduct or intentions of individuals caught up in the two incidents.

But Fenton’s defence lawyer, Peter Brauti, says it’s important to remember that the disciplinary hearing is not a public inquiry and concerns about the treatment of those who were detained have nothing to do with Fenton.

Brauti says the hearing is only dealing with two issues—whether Fenton had grounds to issue the arrest orders, and whether he failed to monitor the processing and continued detention of those arrested.

Fenton ordered officers to box in protesters in front of a downtown hotel. More than 260 people were arrested and taken to a makeshift processing centre, which came under severe criticism for its deplorable conditions.

On the Sunday, six minutes after coming on shift, Fenton ordered police to keep scores of people standing for hours at a downtown intersection despite a severe thunderstorm that left them drenched.

The hearing has also been told by lawyers for certain complainants that Fenton repeatedly referred to the protesters as “terrorists” over the summit weekend. None of the allegations has been proven.

Retired Ontario Superior Court judge Peter Grossi is presiding over the hearing, which expects to hear from witnesses that will include broadcaster Steve Paikin and human rights monitors who were among those arrested.

More than 1,000 people were detained over the summit weekend in what is considered the largest mass arrest in Canada’s peacetime history. Most were released without charge.

To date, only two constables of 32 officers charged have been found guilty of discreditable conduct arising out of the G20. Another 14 cases were dismissed, withdrawn or stayed. The rest are ongoing.

One officer was criminally convicted of assault. His disciplinary case is on hold pending an appeal.