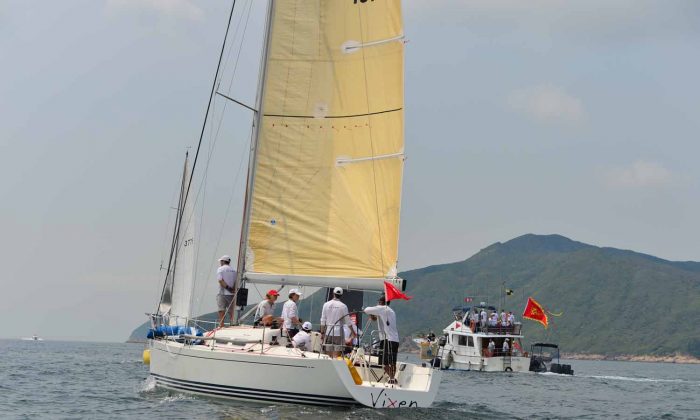 The sombre crew of “Vixen” mourning the loss of their leader Peter McCaffery before the start of the Mirs Bay Passage Race on Saturday Aug 2 2014, In the background, flying the Club’s flag at half mast is the Hebe Haven Committee boat with members of the McCaffery family and friends on board. (Bill Cox/Epoch Times)
Hong Kong

There was a large turnout of 61 boats for this annual passage race in the Typhoon Series calendar from Port Shelter to Mirs Bay on Saturday Aug 2. After a prize giving, a BBQ and overnight stay, 21 boats set off on a pursuit race back to Hebe Haven.

The weekend, however, was overshadowed by the news that Peter McCaffery, owner/skipper of Vixen had lost his fight against cancer. After initial chemotherapy he seemed to have overcome from his attack and had been leading his team until just a few weeks ago, when he went for further treatment. It was a great shock to hear of his demise.

One minute silence was held before the start of the race in respect for McCaffery, the Club’s Flag on the Committee Boat was lowered to half-mast and boats flew white streamers from their rigging. It was a sad start to the race and sad day for Hong Kong Yachting.

Mirs Bay Passage Race
The race finally started at 11.40am in a 5 Knot wind which decreased to 2 Knots by the time IRC-D, Sports Boats and the HKPN fleet set off. But luckily, the sea breeze kicked in as all boats headed out to seas and spinnakers were blowing freely producing some exhilarating yachting. The finely tuned Brace Brace Brace was seen to miscalculate the wind on a few occasions. The wind eased again later in the race and the race was shortened to Gau Tau Island for IRC-D, Sports Boats and the HKPN fleet.

IRC
Series leader in IRC-A, “Signal 8” did not take part in this race and the second placed boat “EFG Bank Mandrake” cashed in by taking 1st place on corrected time to put her top of the series standings. The following four places were taken by “Ambush”, “HuAn”, “FreeFire” and “Vineta” respectively. “FreeFire” took line honours in 3:10:43.

In IRC-B, “Mojito” took line honours and 1st place followed by “Orien Express”, “Lighthorse” and “Sell Side Dream”. With this win “Mojito” consolidated her lead position in the series particularly as the other top contenders “Stella”, “Blackjack” and “Outrageous” all finished down the order.

“Gearbox”, “Gambit”, “Dexter II” and “Talkinghead” was the finishing order in IRC-C division. This result allows “Dexter II” to stay at the top of the series ranking, one point ahead of “Gearbox” who moves into 2nd place and “Vixen” drops a place to 3rd.

In IRC-D, “Goddess” took line honours but “Moll” won on corrected time with “Taxi” 2nd and “St Happens” 3rd. This result moves Taxi into the joint series lead on 11 points with “St Happens”. “Calamansi said looking for the gate before Gau Tau affected their tactics, finished in 6th place has now dropped to 3rd in the overall standings.

Sports Boats
The top four boats in the Sports Boat series: “Merlin”, “Black Magic”, “Sidewinder” and “Good Vibrations” finished this race in series order, edging “Merlin” into a one point lead over “Black Magic” with “Sidewinder” a further 3-points adrift of the leader.

HKPN
“Surfdude” was the fastest HKPN boat in this race finishing in 2:28:13 but she was relegated to position 13 on corrected time. “Elites 99” finished 1st, “Dolphin Six” was 2nd and “La Folia” was third on corrected time. “Windseeker” takes over 1st place in the series, “Jazz” moves into 2nd spot and “Kiasu” the previous leader is relegated to 3rd (at least temporarily).

Pursuit Race
In the return pursuit race from Mirs Bay to Hebe Haven on Sunday Aug 3 took place in very light breeze, only six of the 21 starters finished the race. Nine competitors retired en-route and six boats arrived after the time cut-off. The race was won by “RB” in 4:59:04, followed by “Blackjack” and “Dexter II”. “Talkinghead”, “Windseeker” and “Surfdude” the only other boats to finish the race.