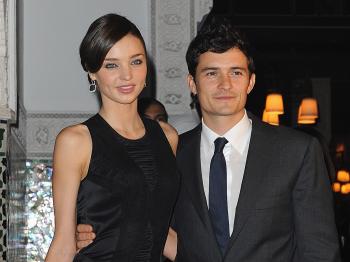 (L-R) Miranda Kerr and Orlando Bloom have a child on the way, their first. (Pascal Le Segretain/Getty Images)
Entertainment

It wasn’t easy to keep quiet. Kerr, who rose to fame by being a Victoria’s Secret lingerie model, broke the news by saying, “Yes, I am pregnant. Four months along,” according to Reuters.

Kerr and Bloom, 33-year-old lead actor of the Pirates of the Caribbean and The Lord of the Rings, first met backstage at a Victoria’s Secret fashion show in 2006, said the Herald Sun. They began dating in 2007 and were quietly married in July of this year.

Miranda Kerr always wanted a family. “I’ve always been open about wanting to be a mother one day, and I’ve always thought Orlando would be a great dad,” she told the Herald Sun. Kerr will keep her career as a model—certainly she has many people offering their advice at Victoria’s Secret.

“I think having children and pregnancy is a part of life,” she informed the Herald Sun, “I look at how models like Heidi Klum, Adriana Lima and Alessandra Ambrosio have done it and made it a part of their lives.” (A few months after giving birth, these models were back on the runway.)