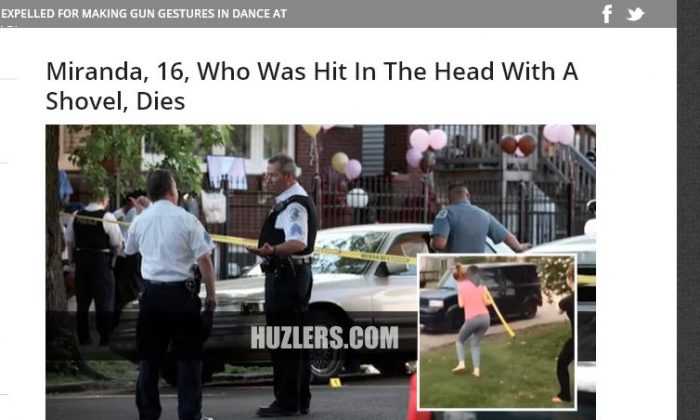 A story saying that 16-year-old Miranda Fugate Lockwood, 16, was killed after she got hit in the head by "Emily Powers" is a hoax. A fake news website took a viral Vine video and made up a story about it. (Huzlers.com screenshot)
Social Media

Miranda Fugate Lockwood, a 16-year-old girl, was not killed after she was hit in the head in a viral video posted on social media website Vine. Emily Powers, the girl who hit her, and Fugate are both reportedly going to be investigated by police.

In an interview before the death hoax went viral, Fugate said that she might lose some of her hearing due to the incident.

“My head bounced off the pavement and after that, I was crying for them to take me to the hospital. I was completely blacked out,” she told Rover’s Morning Glory. “I don’t really remember much. The last thing I remember is my head hitting the cement and then being off in the cornfield. It hurt a lot.”

Earlier this week, the Vine video of her getting hit generated hundreds of thousands of shares and likely millions of views.

A website called Huzlers.com, which has posted a number of fake death hoax stories in the past, published a story saying Fugate (but falsely saying her last name is “Lockwood”) was killed after getting hit in the head.

However, a disclaimer on the bottom of the page says that it’s not real.

“Huzlers.com is a combination of real shocking news and satire news to keep its visitors in a state of disbelief,” says the website’s About Us section.

The crudely worded article reads: “Miranda Fugate Lockwood died of serious head injuries after being hit with a shovel in the head by an old friend of hers named Emily Powers. The whole thing was caught on video and posted all over the internet and generated around 500,000 video views in just 2 days… In the video, the two girls begin fist fighting outside Emily’s house for a few seconds before Emily threatened to go inside her house and bring out an air soft gun which shoots plastic BB’s, when Miranda suddenly charged at Emily, Emily grabbed a nearby shovel and “cracked” Miranda in the dome.”

Fugate gave an interview with a local radio station and said the fight stemmed over a boy. She claimed the other girl was saying negative things about her for the past several years and then decided to fight her.

But despite the death hoax being debunked by a number of media outlets, users on Twitter and Facebook were still sharing the fake article as if it were real.