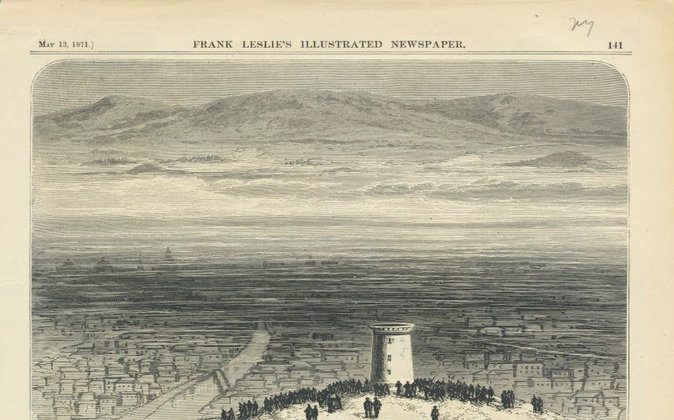 Mirage or Not? 7 Strange Fata Morgana Sightings From Around the World

Fata morgana is typically defined as a mysterious phenomenon resulting from atmospheric distortion or optical illusion. Light from an object can be refracted or reflected by air so the observer seems to see something that looks real.

Mirage sightings are not limited to areas in the desert. This phenomenon is also widely seen from the seas, lakes, or layers of ice around the poles. Here are some amazing mirage sightings recorded in history.

On August 1894, it was reported that thousands of people in Buffalo, New York witnessed a spectacular mirage on Lake Ontario. The scene was a reflection of Toronto, Charlotte, and suburbs of Rochester reflected 56 miles across the lake.

The Fata Morgana was caused by an intense temperature inversion which led straight-line light rays to curve downwards. In addition, the air was perfectly stable enough for the image to project from a great distance.

The report said that the shadow was so clear that the witnesses could easily see the entire landscape,  a sailboat, and the church spires. The appearance had been witnessed by more than 20,000 people crowding the shores of Lake Ontario.

2. Shadow of Edinburgh Over the City of Liverpool

In Transactions of the British Association for the Advancement of Science of 1847, Dr. DP Thomson reported that the reflected image of Edinburgh stood right around the clouds above the city of Liverpool on Sept. 27, 1846. This scene was witnessed by two residents at the Great Park in Birkenhead for 40 minutes. Edinburgh is a city with a distance of about 325 kilometers north of Liverpool.

3. The Image of Stralsund in Germany

The London Times reported another remarkable mirage that occurred near the German town of Stralsund on July 28, 1846 at 3:30 a.m.

A witness happened to be walking near the Baltic coast when she accidentally saw an image of Stralsund in a pale blue light. This blue light soared above the island of Rugen on the opposite coast for 15 minutes. The picture was so clear that the details of the front of the Gothic church of St. Mary were easily recognized.

Mr. Willoughby, an American Miner, told a story that had to do with a legend of Indian tribes. According to the legend, a city appears every summer in the sky near Mount Fairweather, on the Alaska-Yukon border.

Mr. Willoughby said he saw the mirage for the first time in 1887 and showed the photo as evidence to prove the phenomenon was real. In 1889, The New York Times reported that the city in Willoughby’s photos had been identified as the city of Bristol in England. The story and the photos were then put into a book about Alaska by author Bruce Miner.

CW Thornton, a member of the Mount St. Elias expedition in Alaska, was another witness who said he saw what looked like a town during the summer of 1897.

In 1889, The New York Times found another witness who recalled seeing houses, roads, and large buildings resembling mosques or cathedrals near Mount Fairweather.

In June 1897, a correspondent of the Weekly Times and Echo London returned from “Yukon Gold Mine” and claimed that he saw the city in the sky. He wrote, “… whether this city is on the other side of the North Pole, or not, but that this wonderful mirage occurs from time to time every year is a fact, and we are not the only person who witnessed this phenomenon.”

5. Legend of the Flying Dutchman

The legend of the Flying Dutchman has been around since the 17th century.

The story tells of the ship sailing the seas before a terrible storm sank the ship and killed the crew members  inside. The Flying Dutchman later emerged as a wandering ghost ship that’s haunted by the crew’s souls for all eternity.

There were multiple sightings from sailors who claimed seeing the ship flying out at sea, most of whom took the sighting as a sign of an approaching storm.

However, this phenomenon is now understood as a mirage—not an actual flying ship.

It turns out that lightning and water vapor form a condition that makes a faraway ship appear to be floating on the sea surface. It usually occurs in areas with cold water, such as in the North Sea.

According to The New York Times article for Dec. 21, 1901, a group of fishermen claimed to see the shadow of a large city on the horizon of the frozen ice of Lake Erie.

This shadow was first seen by one fisherman who later told his friends nearby. When they looked up, they too witnessed the strange phenomenon.

The shadow they witnessed was of a big city with hundreds of buildings and roads.  As the shadows grew brighter and sharper, they even saw flames coming out from one building. The fisherman and his company later told reporters that they saw smoke and people emerging from the burning building, with a firetruck on the side of the road.

The scene lasted for half an hour before the mirage faded away.

Thousands of tourists and local residents witnessed a super mirage in May 2005. This phenomenon lasted four hours off the coast of Penglai City, Shandong Province.

Prior to the rare phenomenon, Penglai City was soaked by the rain for two days. The rising mist on the shore created the image of a city with modern high-rise buildings. The image was clearly visible as broad city streets were shown crowded with busy cars and people.

Experts say that many mirages have been witnessed in Penglai all throughout history. Because Penglai is located at the peninsular tip of Shandong, the area is known as the abode of the gods.