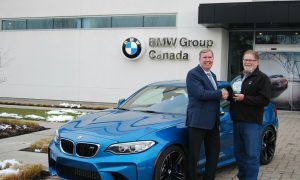 A man was hit by a truck while in a bucket above a highway and lived to tell about it.

The man in the bucket was working on a traffic signal when a truck hit the bottom.

This is incredible video and amazing that the man in the bucket was relatively unscathed.

According to dash camera footage, the worker, at one point, is seen upside down.

Andrew Wolf recorded the footage with his car, saying, “Every time my truck is on, it’s running. This is the most epic and horrific thing I’ve seen.”

The truck was going about 50 mph when it crashed into the bucket, ABC13 reported.

The worker in the bucket dangled in his safety harness for about 30 seconds before the other crew members lowered him to the ground, according to the ABC affiliate report.

“You can see they ignored some safety rules. The road wasn’t blocked off,” said Wolf.

“The truck wasn’t protecting anybody, but he was smart enough to put on a harness and helmet and that’s what saved his life,” added Wolf of the situation.

The worker was in shock but was fine, the report said.

And the driver of the truck stopped, and Wolf called 911.

“I think he used up all his luck that day, but it was just amazing that he literally walked away from that impact,” Wolf said.

A man was captured “straight snoozing” while driving 75 mph in Los Angeles while behind the wheel of a Tesla Model 3.

Seth Blake, a musician, posted the video on Twitter on March 5, claiming: “Dude is straight snoozing going 75 mph on the interstate, letting his @Tesla do the work.”

Dude is straight snoozing going 75mph on the interstate, letting his @Tesla do the work. 😳😴 pic.twitter.com/RQD2LBSnGh

“We eventually lost him, but he was asleep pretty much the whole time. I saw him open his eyes once to look around, but he quickly dozed back to sleep,” he said.

It’s not clear if the man was actually sleeping, but his head appears slumped to the side. Tesla also has not issued a statement on the matter.

The Model 3 has an autopilot feature that is capable of steering the car within a lane and braking for other vehicles. The driver has to have a hand on the steering wheel for the function to work.