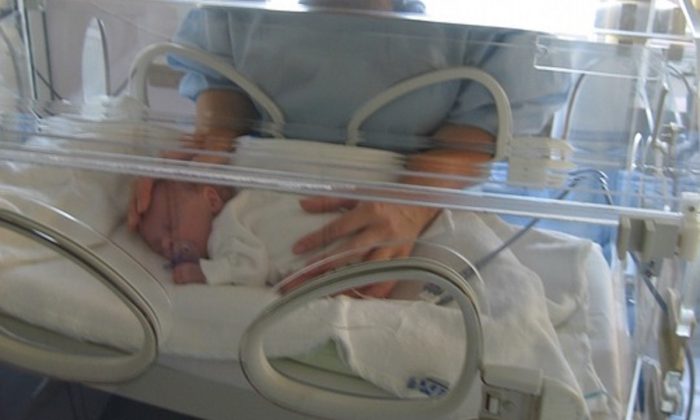 Weighing less than one pound, an Iowa baby born at just 23 weeks is being hailed as “miracle baby.”

Fewer than one in five babies born at 23 weeks survive, are usually not developed enough to fully use their limbs, and are unable to use their lungs.

But Jaden Morrow was born fighting: trying to breathe from the moment he was born on July 11 and moving his arms and feet.

Babies born at 23 weeks gestation aren't supposed to be fully formed, breathing or having use of all limbs, but Jaden came out swinging and screaming at the top of his lungs.

Smartt told the news outlet that after a typical day of work and grocery shopping, she sensed something was happening when she got back to her home in Des Moines.

She told her partner, Jordan Morrow, “I think he’s going to come today.”

She was right. Within 10 minutes her water broke, and her family rushed to the local hospital, where doctors warned her that the survival rate was not high.

“They said I was going to have to deliver in the next day or two and there was a good chance he wouldn’t survive,” Smartt told TODAY. “That was the moment when I fell apart. I was heartbroken.”

But after she gave birth to Jaden, weighing just 13 ounces, those worries gradually began to fade.

“His arms and toes were moving and he was trying to breathe on his own,” Smartt said. “He’s our little miracle.”

Within just two days he was drinking breast milk.

He is the smallest baby born at Blank Children’s Hospital in Des Moines, Iowa, in the past decade.

“For most part, Jaden is stable,” Smartt told TODAY. “He’s on a ventilator and had a small infection, but his doctors think he looks great. He’s getting breast milk and gaining weight.”

All being well, he is expected to be heading home before his due date in November.

Smartt said that her initial worries and concerns about what caused him to be premature have faded.

“It taught me there’s always a plan, and we learned to be patient,” Smartt told KCRA. “Jaden is here, and that’s all that matters.”

His parents must wait for the day that he is moved out of the incubator and into an open crib before they can cradle their miracle in their arms.

The family has set up a GoFundMe page to help fund their baby’s medical bills and the cost of travel to and from the hospital.

Written in the first person, the description says: “Weighing in at a whopping 13 ounces, I’m already wowing the doctors. I’ve heard them use terms like ‘amazing’ and ‘remarkable’ to describe me so far–not bad for someone under 1 pound, huh?”

“I hear I’ll have to be here until my due date–so I’ve got a while before I break outta here.”

The post goes on to describe Jaden’s progress, ending, “I can feel all the love and prayers around me, and can’t wait to meet you all!”

In February, a Japanese boy became the smallest surviving baby boy in the world, heading home from the hospital where he had been born weighing just 9.45 ounces.

The baby, who hasn’t been named in reports, was delivered through cesarean section last August after he failed to gain weight during pregnancy and doctors feared his life was in danger after his 24-week scan.

According to Keio University hospital, he was in intensive care until he reached 7 pounds, and he was then sent home on Feb. 20.