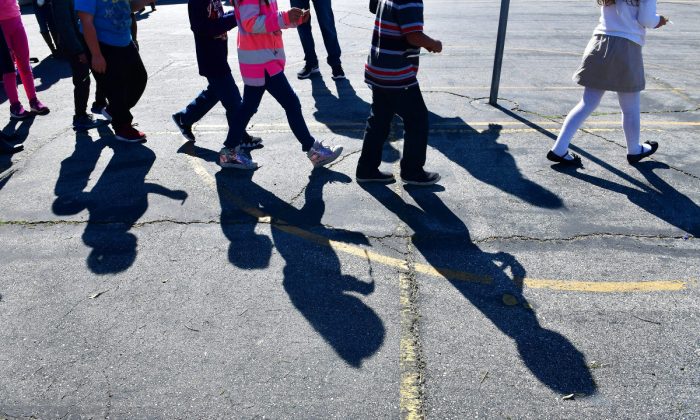 Children's shadows at an elementary school outside of L.A., in Calif., on Feb. 8, 2019. (FREDERIC J. BROWN/AFP/Getty Images)
Southern California

Minors May Get Sex Changes Without Parental Consent, if California’s Teachers Union Has Its Way

Although this CTA belief does not directly change regulations on the matter, it indicates the kind of legislation the powerful union will support.

On Jan. 26, CTA changed an existing policy to explicitly include transgender and non-binary youth among the students who can leave class without parental permission to receive birthcontrol, abortions, and other such services.

While the updated policy does not include “hormone therapy” explicitly, the rationale discussed by CTA’s civil rights committee in making the policy change indicates that’s the final goal.

The policy now reads: “CTA believes comprehensive school based health care clinics are needed to bring caring and responsive services to young people. The clinics shall provide cisgender, transgender and non-binary youth equal and confidential access to decision-making rights for students and their families.”

The rationale behind this policy change was printed in a CTA Report of Board of Directors, Committees, and Items of New Business in June 2019.

The rationale states: “Current interpretation of California state law does not allow trans students to begin gender identity confirming hormone therapy without the consent of both legal guardians, however it does allow for cis minors to receive hormones (e.g. birth control) without the barrier of parental permission.

“This inequity of decision-making forces some children to go through the wrong puberty and can negatively impact the child’s mental health.”

Briggs told The Epoch Times via email regarding the new belief statement, “Teachers and others public school educators adopted this policy, belief statement, to ensure that all students have equal rights regardless of zip code, skin color, language they speak and who they love. The intent of the policy is not to circumvent parents or guardians.”

Jenny Hernandez, a parent in Santa Ana, said during a Feb. 5 Orange County School Board meeting that she’s worried schools are teaching “our kids that gender is a decision based on emotions.”

“Even though it seems very peaceful here in the United States,” she said, “there is a war currently in the minds of our kids.”

Currently, 57 clinics have been established on school properties in Santa Ana, Orange County, alone to facilitate this.

Another is AB 1266, approved in 2013, which states school employees are not allowed to inform parents about a child’s gender identity, unless the child gives consent.

Some parents and community leaders expressed concerns to the Orange County Board of Education on Feb. 5 regarding the treatment of gender in schools.

“Our children are being taught new definitions of gender,” said Shaykh Mustafa Umar, director of education and outreach for the Islamic Institute of Orange County. “Like most parents, Muslims love their children very much, we are very concerned about what our kids learn in school. Whatever curriculum is taught should take scientific facts and family values into consideration,” he said.

According to the framework, its aim is “Dispelling myths, breaking down stereotypes and linking students to resources can help prevent bullying, self-harm, feelings of hopelessness, and serious considerations of suicide.”

“If anyone is concerned about bullying and discrimination, it’s the Muslim community,” Umar said. “So, we totally understand that.”

The San Francisco Unified School District has led the way in California in regards to providing reproductive health services and gender education. It launched the state’s first clinics on school property and created a LGBTQ Family and Gender Diversity teaching guide beginning at the kindergarten level.

But, some parents are critical of the material being taught, saying it goes against their family values.

Stephanie Yates, a parent in Santa Ana and Founder of Informed Parents of California, is frustrated with the “direction California education is going.” She removed her son from the public system. Instead, she enrolled him in a private school within the district.

In addition to establishing many school clinics, or wellness centers, the Santa Ana School District has had a standing partnership with Planned Parenthood since 2019, reinforcing minors’ access to reproductive health services.

With the many changes in how gender is treated in schools, some parents in Santa Ana—a primarily Hispanic city—are concerned that the Orange County School Board isn’t informing non-English speaking guardians of the changes.

While there are limited translating services readily available to non-English speaking families in the district, Umar is making an effort in his community to inform parents about California’s curriculum and policy changes.

Through informational sessions at the Islamic Institute of Orange County, Umar’s goal is to make sure parents, despite language barriers, can make informed decisions about their children’s schooling.

“Teaching children about sexual and gender identities is a very serious responsibility,” Umar said. “It’s going to affect who they become, it’s going to affect their relationship with their parents, and it’s going affect society as a whole. Big changes are taking place in the curriculum, yet there doesn’t seem like there’s much transparency of how these decisions are being made.”