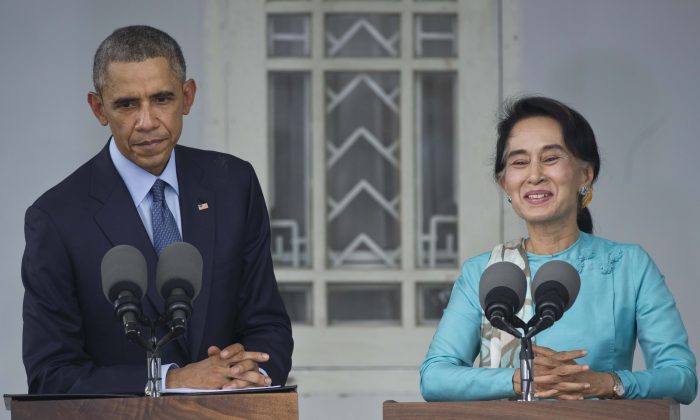 Minority Issues Key to US Sanctions on Burma

Earlier this month, the Obama administration extended economic sanctions against Burma for another year saying the step is necessary despite the progress on democratic reforms.

President Obama notified leaders of the Congress that, “The political opening remains nascent, and concerns persist regarding ongoing conflict and human rights abuses in ethnic minority areas, particularly in Rakhine State, and the continued role of the military in the country’s political and economic activities.”

The extension of sanctions, which comes with the renewal of the National Emergencies Act, prohibits American businesses and individuals from investing in Burma or doing business with Burmese figures involved in repression of the pro-democracy movement since the mid-1990s.

The Obama administration’s policy is an indication of the importance of ethnic minority issues in U.S.-Burma diplomatic relations.

The Obama administration’s policy is an indication of the importance of ethnic minority issues in U.S.-Burma diplomatic relations. It also reflects the sentiment of the international community.

The general expectation before the extension of sanctions was that the United States would move toward normalizing bilateral relations as a civilian government has assumed power in Burma after more than five decades of direct or indirect military rule.

During the years of political and economic sanctions, the American leaders, irrespective of party affiliation, had largely been sympathetic and supportive of Aung San Suu Kyi. Her views were usually taken into account during the review process of American foreign policy toward Burma.

Given the important role of Suu Kyi as the de facto leader in the National League for Democracy (NLD) government, many within Burma and across the world had hoped that the American government would lift the remaining sanctions.

A year ago, the Obama administration lifted a ban on granting U.S. entry visas to Burma’s military rulers and their business partners and immediate family. Bilateral relations have gradually improved in recent years, especially since 2011.

The extension of sanctions came days after the NLD government asked the U.S. Ambassador Scot Marciel not to use “Rohingya” on the ground that using the term is not supportive in solving the prevailing tension in Rakhine State and could even worsen the situation.

Last month, Buddhist monks joined several hundred protesters outside the U.S. embassy in Yangon in the wake of the embassy using the term “Rohingya” in a statement of concern after dozens died when a boat they were on capsized.

Despite the fact that some Rohingyas have lived in the country for generations, the protesters demanded that they be referred to as Bengalis, the illegal immigrants from neighboring Bangladesh.

Since Burma does not officially recognize Rohingya as an ethnic group, it denies most of them citizenship and basic rights. Conflict over land and resources in Rakhine State, where most Rohingyas live in squalid camps, caused deadly violence between Buddhists and Muslims in 2012, which later spread to other parts of the country.

The U.S. government’s official position, in line with the normal international practice, is that communities anywhere have the right or the ability to decide what they should be called.

Another major concern for the U.S. government is the continued armed clashes between the Burmese army and ethnic armed groups, such as the Kachin Independence Army and the Arakan Army, groups that did not sign the Nationwide Ceasefire Agreement (NCA) last October.

On April 27, Burma’s State Counselor Aung San Suu Kyi held a meeting with the Joint Monitoring Committee, a body representative of the army and eight non-state armed groups that signed the NCA and proposed to convene a “Panglong-style” conference within two months.

There is a lingering concern as to how the decades-old problem with the country’s ethnic minorities will be resolved, as the peace process remains precarious.

The historical bilateral relations between the United States and Burma suggest that the pace toward full normalization of diplomatic ties between the two countries will largely depend on the situation of Burma’s domestic politics.

The protracted minority problems of the country, including the question of autonomy for ethnic minorities and the sensitive identity issue of Rohingyas or Bengalis, will continue to be part of the U.S. government’s foreign policy review.

For Burma government and its people, it is high time that these lingering issues are addressed for the sake of the country’s peace, stability, and development.

Finding a solution to the conundrum of Rohingyas internally should be emphasized. However, since many hold the view that they are illegal immigrants from Bangladesh, Burma should consider involving the Bangladeshi government and or a third party such as the Association of Southeast Asian Nations (ASEAN) and the United Nations to address the issue.