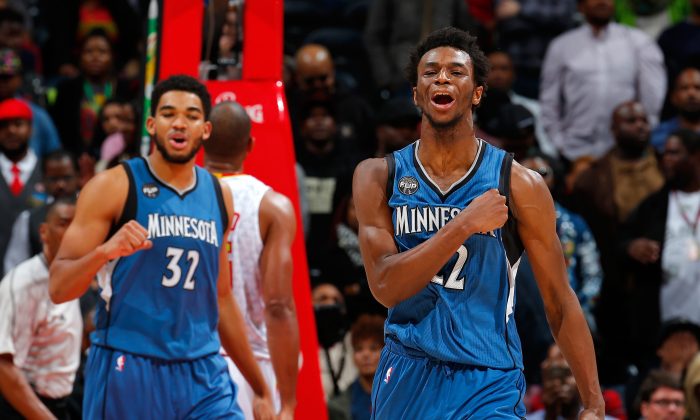 Andrew Wiggins (R) and Karl-Anthony Towns of the Minnesota Timberwolves are two of the best young players in the league. (Kevin C. Cox/Getty Images)
NBA

Alright, I’m calling it right now. The 4–3 Minnesota Timberwolves, which haven’t been to the postseason since Shaquille O’Neal, Kobe Bryant, and the Lakers eliminated them in the 2004 conference finals, are soon going to have the NBA’s best 1–2 punch since those same Lakers won three straight titles from 2000 to 2002.

Timberwolves small forward Andrew Wiggins—the first overall pick of the 2014 draft—and center Karl-Anthony Towns—the first overall pick of last June’s draft—are both very special players. Both are two-way stars that should soon be locks for future All-Star teams as well as inclusion on the exclusive All-NBA teams. That Minnesota has both of them—neither of which are old enough to drink yet—is almost unfair.

Could they eventually both land on the league’s All-NBA first team like O’Neal and Bryant did three straight years from 2002 to 2004? Only time will tell, but they look like a good bet going forward.

Wiggins’s defense has been ahead of his offense since joining the league, yet he’s putting up 19.8 points per game through 6 games this year after averaging 16.9 last season. His all-around defense on the perimeter and his highlight dunks on the other end are the reason the Timberwolves were willing to deal Kevin Love in a trade for him—a deal that looks better with each passing game.

Towns has only played six NBA games, but the 7-foot center has made quite the impact, averaging 16.0 points, 10.4 rebounds, and 3.0 blocks per game thus far. His two-way production is a continuation from his year at Kentucky where he generally dominated the lane—at both ends of the court—in leading the Wildcats to a 38–1 record.

Of course, there have been a number of great duos and trios over the last dozen years in the NBA, yet surprisingly no two teammates have made the All-NBA first team multiple times since the Lakers twosome did more than a decade ago.

LeBron James teamed with Dwyane Wade and Chris Bosh in Miami in 2010, but injuries eventually had started to wear on Wade and he never made the first-team after James took his talents to South Beach.

Kevin Durant has been a first-team All-NBA selection four times in his career and as great as teammate Russell Westbrook has been, he’s yet to elevate past the NBA’s second-team.

In fact, Phoenix’s Steve Nash–Amar’e Stoudemire duo is the last pair of teammates to be first-teamers when they achieved the feat in 2007, although Stoudemire was never considered one of the top five players in the league—just the top center.

Whether Wiggins and Towns individually dominate to the extent that Bryant and O’Neal once did remains to be seen. The Timberwolves would be happy enough if they just equaled their three titles won together.