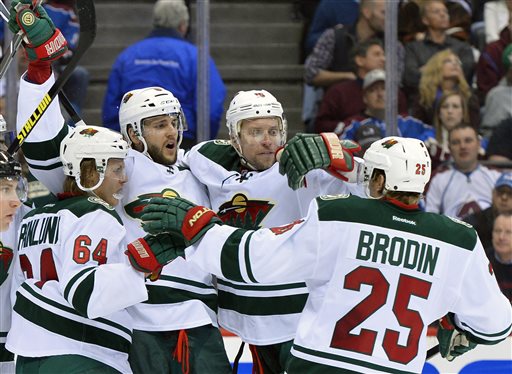 The Chicago Blackhawks face the Minnesota Wild int he second round of the Stanley Cup Playoffs on Friday night.

Chicago gets the home rink advantage in the first two games.

The match will be broadcast on RDS and TSN in Canada and NBC Sports Network in the United States.

Live streaming will be available via CBC and NBC Sports Extra.

Game 2 in the series is scheduled for Sunday.

The series shifts to Minnesota for game 3 on Tuesday and game 4 on Friday.

See an Associated Press preview below the photo.

While the Wild and Avalanche played an epic Game 7 on Wednesday night, the Blackhawks were hanging on every goal.

“It was crazy. Back and forth. Every time there was a goal scored, I was thinking we were playing that team or the other team, right down to the very end,” Sharp said.

The very end had the Wild celebrating after Nino Niederreiter’s second goal of the game lifted Minnesota to a 5-4 overtime win at Colorado, setting up a rematch from last year’s playoffs.

Minnesota lost to Chicago in five games in the first round, and the Blackhawks went on to win their second NHL title in four seasons.

“It is definitely a different team,” Blackhawks coach Joel Quenneville said. “You got to commend them on how they played at the end of the year to get themselves in the playoffs. Had a great run and had a lot of momentum going into that series, and they played a great series.”

Minnesota became the first team in NHL history to record four tying goals in Game 7 of a Stanley Cup playoff series, according to STATS. The Wild also advanced for the first time since they made it to the Western Conference finals in 2003.

“I think this year’s team, we went through a lot, a lot of adversity throughout the year, and I think we grew from last year,” captain Mikko Koivu said. “The experience we have now from the first round . brought us together in many ways.”

Next up is Game 1 of the conference semifinals on Friday night in Chicago, where the Blackhawkspracticed Thursday without captain Jonathan Toews. Quenneville said the center was “a little under the weather” and would play in the opener.

The big question for the Wild is the status of goaltender Darcy Kuemper, who left midway through the third period of Game 7 with an injury. Ilya Bryzgalov, who started the first two games against Colorado, came in and made one save in the final 13:15 to help Minnesota advance.

Wild coach Mike Yeo said he had no update on Kuemper, and it might not matter all that much to his team anyway. Minnesota had three different goaltenders start at least 20 games this season, and Bryzgalov made 12 starts during the regular season.

“It’s not really affecting us at all,” forward Zach Parise said. “We’ve had a pretty unique goaltending situation this year, but it really hasn’t affected us in the locker room at all. We’re comfortable with whoever we’re playing with and it really hasn’t changed the way we play at all.”

Here are five things to watch in the Wild-Blackhawks series:

SCHEDULING: The Blackhawks closed out the Blues with a 5-1 victory in Game 6 on Sunday, and then rested for two days before returning to practice on Wednesday. The Wild had that incredible Game 7 against Colorado, and then traveled to Chicago with a short turnaround before Game 1 of the second-round series. With Game 2 on Sunday afternoon, Chicago could jump on a weary Minnesota team to quickly grab control of the series, or the Wild could use the momentum from their first-round escape to steal home-ice advantage from the rusty Blackhawks.

“It could work either way,” Sharp said. “You’ve seen teams come and then really ride that momentum from the previous series and you’ve seen the opposite happen.”

SCORING: Parise had 10 points in the first round against Colorado, but only managed one goal in the last year’s playoff series against Chicago. The 29-year-old forward has four goals and two assists in 20 career games against the Blackhawks. Parise had plenty of miserable company last postseason. Koivu was shut out against the Blackhawks, finishing with a minus-6 rating for the five games. Star defenseman Ryan Suter also was held without a point.

GOALTENDING: While Minnesota is uncertain about its situation in net, Corey Crawford is rolling for Chicago. He had a big shutout in Game 3 of the first round against St. Louis, and stopped 35 shots in Sunday’s clinching 5-1 win. Crawford is third in the NHL with a 1.98 goals-against average and a .935 save percentage in the postseason.

HISTORY: Chicago (107 points) placed third in the Central Division, right above Minnesota (98) in fourth. But the Wild went 3-1-1 against the Blackhawks this season. They won three of the first four meetings before a 3-2 shootout loss at Chicago on April 3.

OVERTIME: Not only did Minnesota go the distance against Colorado, but four of the games went to overtime. Chicago also played four overtimes against St. Louis in the first round, including a 4-3 loss in Game 1 that required three extra periods.