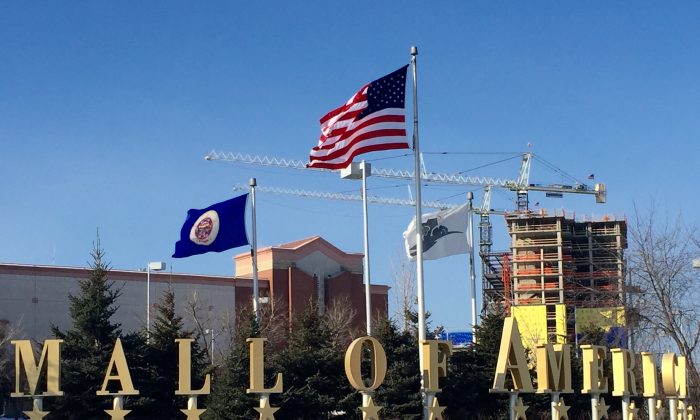 A Sunday, Feb. 22, 2015 photo shows the exterior of the Mall of America in Bloomington, Minn. A video released late Saturday by the terrorist group al-Shabab urged Muslims to attack shopping malls in North America, Britain and other Western countries, specifically mentioning the Mall of America in Minnesota. (AP Photo/Star Tribune, Jerry Holt)
US

The terrorist group al-Shabab is hoping to incite Somali immigrants in Minnesota to attack the Mall of America, the country’s largest and most frequented shopping mall.

The Somalia-based group has a track record of recruiting immigrants from the Minneapolis–St. Paul area, which has the country’s most concentrated Somali community.

In a video released Saturday, al-Shabab called for attacks on major shopping malls in Canada, the United Kingdom, and the United States, specifically naming the Mall of America and including its GPS coordinates, according to a report by the Minnesota newspaper St. Paul Pioneer Press.

The group claimed responsibility for a September 2013 attack on a shopping mall in Nairobi, Kenya, which killed more than 60 civilians.

The Mall of America released a statement Saturday saying that the mall was taking the threat seriously.

“We will continue to monitor events with the help of federal, state, and local law enforcement agencies,” it said. “Mall of America has implemented extra security precautions, some may be noticeable to guests, and others won’t be.”

The Department of Homeland Security said Sunday that it was not aware of “any specific, credible plot against the Mall of America or any other domestic commercial shopping center,” according to a report by Reuters.

The St. Paul Pioneer Press reported that visitors still packed the mall on Sunday, despite the threat.

Al-Shabab has been recruiting members from the Somali immigrant community in Minnesota since around 2007, said Ben Petok, communications director at the federal attorney’s office in Minnesota. The state has the country’s largest population of people of Somali descent, at around 32,000, according to census data.

More than 20 young men from the Minneapolis–St. Paul area have since traveled to Somalia to fight with the terrorist group, Petok said.

Then, in 2013, the Islamic State of Iraq and Syria (ISIS) also began recruiting Somali Minnesotans to fight with them in the Middle East, according to a fact sheet compiled by the U.S. Attorney’s Office of Minnesota.

The Department of Justice chose Minneapolis as one of three cities (the others being Los Angeles and Boston) to participate in a pilot “countering violent extremism” (CVE) program designed to prevent individuals from subscribing to extremist ideology.

Extremist Acts in America Not Limited to Jihadist Threat

The program in Minneapolis is called “Building Community Resilience,” where law enforcement and local community nonprofits are partnering to offer scholarships, mentoring, job training, and mental health services to youth.

Petok said the root causes of extremism involve young people who lack opportunities to succeed, leading them to turn to radical ideologies. The program seeks to address that.

The attorney’s office has been working with leaders in the Somali community to devise the program since last summer. The program will also include posting on social media narratives that counter extremist propaganda.

The Council on American-Islamic Relations (CAIR), Minnesota chapter, condemned al-Shabab’s terror threat in a joint statement from leaders in the Minnesota Somali and Muslim community Monday.

“The safety and security of Minnesotans and of all Americans is of utmost importance to Somali-Americans,” it said.

“While remaining vigilant, we must not allow a terror group to achieve its goal of spreading fear or panic. We must also prevent justifiable security concerns from being used as a pretext to promote hatred, prejudice, and suspicion of the whole community,” the statement continued.

Nasibu Sareva, the executive director of the African Development Center of Minnesota, also condemned the threat in an email statement and expressed that his organization does not plan to make any changes to its community programs in light of the threat.

“We will not only continue to be vigilant as the whole community has always been but also continue to come up with new good programs to help our youth and the community as a whole,” Sareva said.

CORRECTION: A previous version of this article incorrectly spelled the name of the communications director at the United States Attorney’s Office in Minnesota. The correct spelling of his name is Ben Petok. Epoch Times regrets the error.