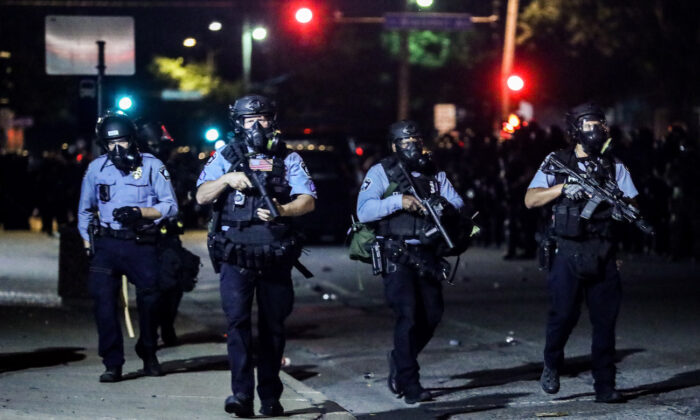 The Minnesota Supreme Court on Thursday ruled that voters in Minneapolis will be able to have their say on the city’s police department on the local ballot.

It overturned a lower court ruling that struck down a proposed ballot initiative asking voters to replace the city’s police department with a new Department of Public Safety (DPS)—an amendment that came in the wake of the nationwide protests and riots after George Floyd’s death in May 2020.

According to the proposed charter amendment, the DPS would employ a “comprehensive public health approach to the delivery of functions” of public safety and “could include licensed peace officers (police officers), if necessary, to fulfill its responsibilities.”

The proposed department would be led by a city council-appointed commissioner and “could include” police officers “if necessary.” It would would consist of peace officers and would ensure public safety through “a holistic, public health-oriented approach,” according to the city’s website.

The state’s highest court ruled that the ballot language failed to adequately describe the effects of of the DPS, and that it did not meet the “high standard” that the court set in earlier cases. Chief Justice Lorie Gildea said that the court will issue a full opinion laying out its legal reasoning some time later to avoid impeding the start of voting.

“Now voters have the opportunity to make their voices heard on this ballot question,” City Attorney Jim Rowader said.

The Supreme Court was under pressure to rule quickly because early and absentee voting opens at 8 a.m. Friday in the Minneapolis municipal elections. The ballots were already being printed when Hennepin County District Judge Jamie Anderson ruled against the language Tuesday. It was the second time she had struck down the council’s wording. Gildea put the case on the fast track Wednesday.

Lawyers on both sides said beforehand that they expected the high court ruling allowing the ballot language to be the final word, given the late hour. Leaders of the pro-amendment Yes 4 Minneapolis campaign have a rally set for Friday afternoon.

“We’re all very pleased that the system worked,” said Terrance Moore, an attorney for Yes 4 Minneapolis. “As ugly as it sometimes looks, the process went through from beginning to end and in the end the Supreme Court followed the law and its precedent. And the voters get to vote on the ballot question.”

Proponents of “defund the police” argue that governments should spend less on law enforcement and more on social services in an attempt to address perceived racism. While the proposed amendment does not use the term “defund” it would remove the city charter’s requirement that Minneapolis have a police department with a minimum staffing level.

Critics of the proposal, including former council member Don Samuels and his wife, Sondra, who were behind the court challenge, said the ballot language leaves too many important questions unexplained for voters about how the new department would be implemented, led, staffed and funded.

Yes 4 Minneapolis, which led the initiative, argued in its filing with the Minnesota Supreme Court that the police department would not be replaced immediately if the proposal were to be approved.