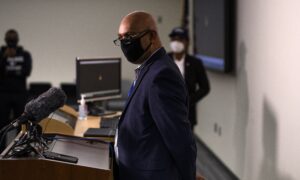 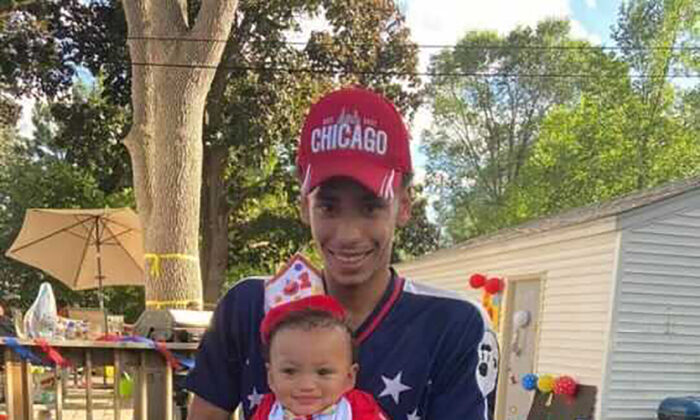 Daunte Wright and his son Daunte Jr., at his first birthday party in an undated photograph. (Ben Crump Law, PLLC. via AP)
Crime and Incidents

Minnesota Police Union Chief: Daunte Wright Would Be Alive Today If He Had Complied With Orders

The head of Minnesota’s largest police union says Daunte Wright, who was killed by an officer over the weekend, would be alive if he had complied with police orders.

“This is going to be an unpopular statement,” Brian Peters, executive director of the Minnesota Police and Peace Officers Association, said during a WCCO interview on April 14. “Daunte Wright, if he would have just complied. He was told he was under arrest. They were arresting him on a warrant for weapons. He set off a chain of events that unfortunately led to his death.”

Of the shooting, Peters said that he is “not excusing it” but noted that “what we’re seeing in policing these days is that noncompliance by the public.”

Tim Gannon, the former police chief of Brooklyn Center, Minnesota, where Wright was shot, said the officer in question was 26-year Brooklyn Center Police Department veteran Kim Potter, who allegedly mistakenly drew her gun instead of her Taser when she shot Wright. Potter resigned from her position and was later charged with second-degree manslaughter.

Wright was resisting a felony outstanding warrant and was trying to flee in his car.

Black Lives Matter protesters have descended on Brooklyn Center and have looted businesses, engaged in riots, and clashed with officers in front of the precinct building following Wright’s death. Dozens have been arrested and the state was forced to deploy the National Guard.

“This is way over his head,” Peters said. “Both Curt Boganey and Tim Gannon were political pawns in whatever game the current mayor is playing. If I were the mayor, I would not allow the political activists to run the show.”

Boganey, the city manager, also resigned from office this week.

Police say Wright was pulled over for expired tags on April 11, but they sought to arrest him after discovering he had an outstanding warrant. The warrant was for his failure to appear in court on charges that he fled from officers and possessed a gun without a permit during an encounter with Minneapolis police in June 2020.

Body camera footage released by Gannon on April 12 shows Potter approaching Wright, who is being arrested by another officer in front of his car.

As Wright struggles with the police officer, Potter shouts: “I’ll tase you! I’ll Tase you! Taser! Taser! Taser!” before firing a single shot from a handgun in her right hand.

A criminal complaint against the former officer noted that Potter holstered her handgun on the right side and her Taser on the left. To remove the Taser—which is yellow and has a black grip—Potter would have to use her left hand, the complaint stated.