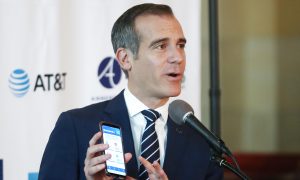 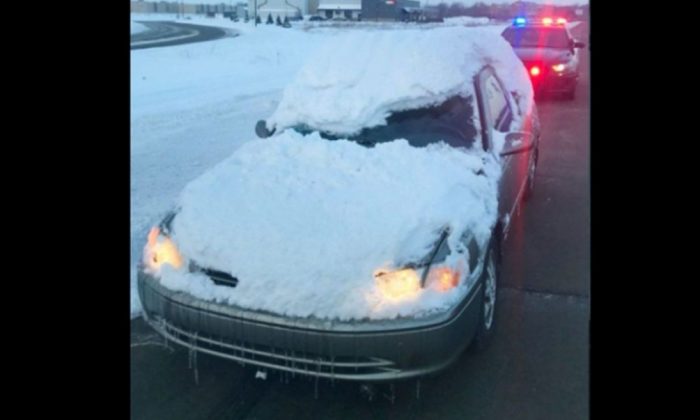 The Minnesota State Patrol tweeted a photo of a car that got pulled over recently for being almost entirely covered in snow, save for a small square of the windshield in front of the driver and the driver’s door window. (Minnesota State Police)
US News

Police in Minnesota warned drivers about driving with too much snow on their vehicles.

The Minnesota State Patrol tweeted a photo on March 9 of a car that was pulled over for being nearly covered in snow—except for a small portion on the windshield in front of the driver.

“Don’t be this person when it snows,” the state patrol wrote.

Don’t be this person when it snows. Please. Please. Please. A trooper stopped this car Feb. 14 in Elk River. Yes, they were cited. Sure, maybe the snow would blow off — onto someone else’s car. Clean off your vehicles BEFORE you hit the road. pic.twitter.com/NlLjemKmJe

“Please. Please. Please,” it tweeted. “A trooper stopped this car Feb. 14 in Elk River. Yes, they were cited. Sure, maybe the snow would blow off—onto someone else’s car. Clean off your vehicles BEFORE you hit the road.”

Several states require car windows to be clear of snow or ice, but Minnesota state law requires vehicles to have snow and ice removed from the windshield and front side windows.

“You’re required to have your front windshield and front side windows clear as to not obstruct vision in any way,” said Minnesota State Patrol’s Lt. Eric Roeske, reported CBS Minnesota.

“We recommend, it’s not maybe the easiest thing, to do, but to get all that loose snow removed from the vehicles,” added Roeske.

He said that it doesn’t take much time to do.

“Sometimes people are in a hurry or they forget, or they think that their defrosters will work quick enough,” said Roeske. “If you can’t see out your windows, you’re not only putting yourself, but everyone else on the road, in jeopardy.”

Q: Recently I have noticed quite a few semi trucks on the freeway with snow and ice blowing off the top of the trailers,…

There is a law saying that snow or ice falling off vehicles is technically littering, which is a misdemeanor.

Another trooper, Sgt. Neil Dickenson with the Minnesota State Patrol, offered answers to common questions, according to the Duluth News-Tribune.

“Recently I have noticed quite a few semi trucks on the freeway with snow and ice blowing off the top of the trailers … Is there a requirement to remove the snow/ice prior to traveling with the trailer?” asked one person.

Dickenson said that ice falling from a vehicle could be considered an unsecured load under state law.

“Drivers should be concerned about civil liability if they fail to take reasonable steps to remove snow and ice that result in property damage or injuries from a crash,” he said. “When traveling behind a vehicle with an unsecured load or ice/snow falling from it, give yourself plenty of room behind the vehicle to avoid any obstacles that may fall off and strike your vehicle. If possible, go around or pass the vehicle when it is safe to do so.”

He also recommended that drivers clear all ice or snow from all windows.

Other states have more stringent laws, requiring drivers to remove all snow and ice from every surface of a vehicle.

For example, in New Jersey, “remember to remove all ice and snow from your vehicle before driving, especially from the hood, windows, and roof,” according to NJ.gov.

Motorists who fail to do so could face a fine of up to $75 or as much as $1,000 if falling ice or snow causes injury or property damage.

In New York, officers can pull over drivers who have snow obstructing a window or if the snow is on the roof of the vehicle.

“(Drivers) can be stopped and encouraged to remove any excess snow from their vehicle and reminded that it is a safety issue—not only for themselves but for other people driving on the road,” Peekskill police Captain Paul Astrologo told LoHud.

New York state has a law saying that one must clear all the snow and ice off your entire vehicle before operating it.

“If you must drive, first clear the ice and snow from your vehicle. This includes the headlights and taillights, the windshield wipers, and all the windows. Under New York State law, it is illegal to operate a motor vehicle with anything that obstructs the driver’s view. Additionally, license plates must be visible, headlights should provide adequate illumination, and all lights should be visible to other motorists,” says the New York DMV website.