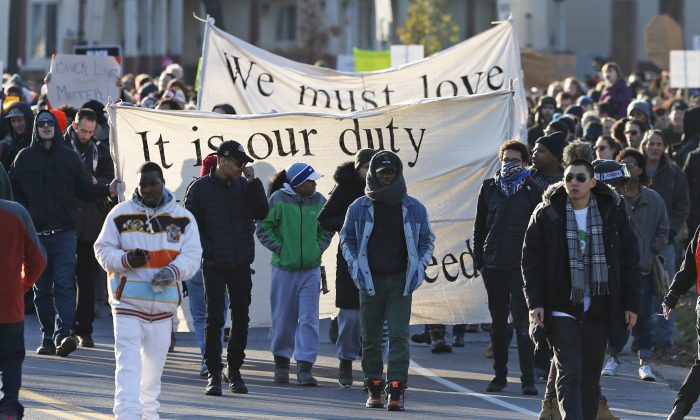 Black Lives Matter protesters and supporters march from the Minneapolis Police Department's Fourth Precinct to the Federal Building in Minneapolis, Tuesday, Nov. 24, 2015. The fatal shooting of Jamar Clark, a black man, by a Minneapolis police officer, has pushed racial tensions in the city's small but concentrated minority community to the fore, with the police precinct besieged by the makeshift encampment and many protesters. (AP Photo/Jim Mone)
US

A Minnesota police officer who allegedly wrote on Facebook urging drivers to run over Black Lives Matter protesters has been suspended.

Sgt. Jeffrey M. Rothecker was named in an internal affairs complaint after a citizen came across a posting from “JM Roth.”

The St. Paul Police Department confirmed to Fox9 that an officer has been put on administrative leave after the complaint was filed.

“Run them over. Keep traffic flowing and don’t slow down for any of these idiots who try and block the street. Here is the deal, you continue to drive and if you hit someone make sure you call 911 to report the accident and meet the cops a block or two away and you can justify stopping further away because you feared for your safety since the past people in this group has shown a propensity towards violence,” Rothecker allegedly wrote.

“Since they are trying to block the street and/or cross where there is no crossing you should not be charged with anything. Now, these idiots could try and sue you in civil court, but remember that it will be jury trial and so most likely it will come out in your favor.”

Andrew Henderson is the citizen that made the complaint, after finding the posting online. He recorded a video that shows him making the department aware of the posting.

“I was just flabbergasted,” Henderson told the Star Tribune. “A law enforcement officer is supposed to serve and protect the people, not incite violence against them.”

Mayor Chris Coleman said in a statement that he is “outraged and disgusted by the post.”

He added: “There is no room in the Saint Paul Police Department for employees who threaten members of the public. If the allegation is true, we will take the strongest possible action allowed under law.”