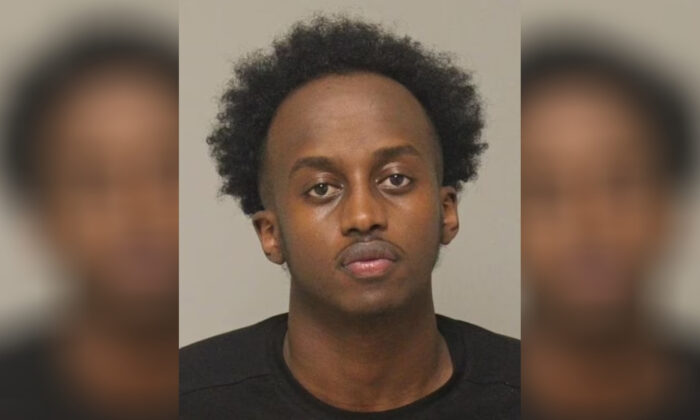 A Minnesota man who pleaded guilty to conspiracy to burn down a high school during the 2020 riots was sentenced to 60 hours of probation, avoiding jail time.

Mohamed Hussein Abdi, 20, was informed of the sentence during a court hearing on Feb. 3.

The charge to which Abdi pleaded guilty carries no mandatory minimum jail sentence but allows a judge to impose up to five years in jail and a fine of up to $250,000.

U.S. District Judge David Doty handed down the sentence. According to a court document, the sentence was guided by the Sentencing Reform Act of 1984.

Prosecutors were seeking 37 to 46 months in jail, based on factors like Abdi’s criminal history and cooperation. Judges are free to diverge from prosecutorial recommendations.

“Mr. Abdi was thrilled” to avoid jail time, Ryan Garry, one of his attorneys, told The Epoch Times in an email.

In addition to 60 hours of probation, Abdi was ordered to undergo mental health treatment, perform 120 hours of community service, perform additional community service unless he obtains a job, and pay a fine of $34,028 to Gordon High School in St. Paul, which he tried burning down.

A representative of the school didn’t immediately return a request for comment.

Prosecutors say Abdi and others gathered near the high school on May 28, 2020, during the riots that unfolded following the killing of George Floyd in nearby Minneapolis. The group broke the glass out of a door and entered the school. When inside, Abdi “poured the accelerant on the floor of the school cafeteria and inside a trashcan, which the defendant positioned near the door,” and “defendant poured a trail of accelerant on the ground behind him as he exited the school,” according to court documents, which described surveillance footage.

Abdi set a piece of clothing that was doused with accelerant on fire, re-entered the school, and dropped it into the trashcan before tipping the trashcan over towards the accelerant he had poured onto the floor, prosecutors said.

Abdi pleaded guilty to conspiracy to commit arson. According to the plea agreement, he and the group “engaged in conduct designed to maliciously damage or destroy the building by means of a fire.”

Jose Felan, one of the accused co-conspirators, pleaded not guilty in 2021 and has a change of plea hearing set for Feb. 24.