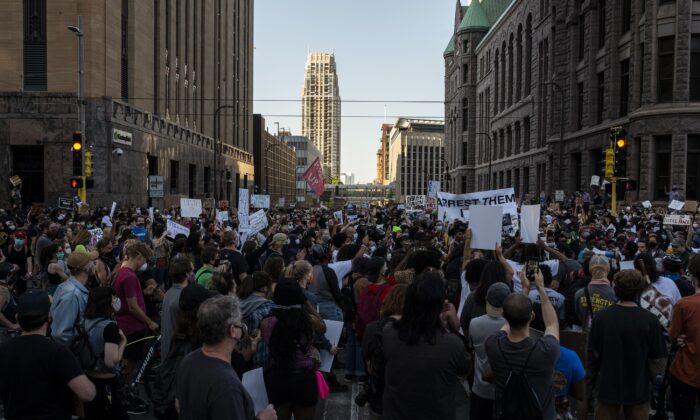 Protesters march through the street in downtown Minneapolis, Minn. on May 28, 2020. (Stephen Maturen/Getty Images)
US News

After a CNN reporter was arrested while covering the protests in Minneapolis, Minnesota Gov. Tim Walz apologized to the network.

“There is absolutely no reason that something like this should happen. Calls were made immediately. This is a very public apology,” Walz said at a press conference Friday.

The Democrat said he called CNN President Jeff Zucker a few minutes after learning of what happened.

CNN confirmed the contact and thanked Walz “for his swift action,” which aided the release of the crew.

Omar Jimenez was arrested by Minnesota State Patrol officers while reporting live at about 5 a.m. on Friday from the protests. He was led away in handcuffs, followed by a CNN producer and camera crew.

Officers declined requests to state a reason for the sudden arrest.

The network called the arrests “a clear violation of their First Amendment rights.” The quartet was taken to a public safety building and released about an hour later.

“In the course of clearing the streets and restoring order at Lake Street and Snelling Avenue, four people were arrested by State Patrol troopers, including three members of a CNN crew,” the state patrol said in a statement.

“The three were released once they were confirmed to be members of the media,” it added.

Walz, according to CNN, told Zucker he “deeply apologizes” and called the arrests “unacceptable.”

The Democrat activated the Minnesota National Guard later Thursday after protests spiraled out of control, devolving in some areas into riots.

Around 500 soldiers arrived in Minneapolis, St. Paul, and nearby communities by Friday morning.

People gathered to protest after George Floyd, a black man, died after a police officer knelt on his neck during an arrest on Monday.

Jimenez said after being released that the moment before the arrest a person ran past them and was arrested. Officers then arrested the CNN employees.

“That was the first moment, I can say, that police had gotten behind us. So in a sense, we were sort of surrounded by state patrolmen and, it seemed like, Minneapolis police officers, as well,” he said.

Officers didn’t express animosity and talked with Jimenez about the protests and riots, Jimenez said.