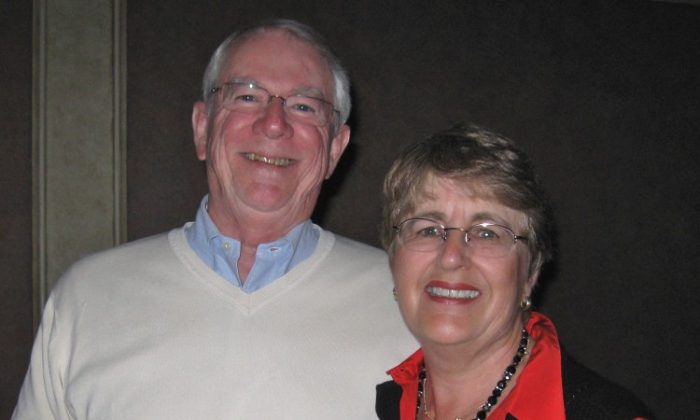 Mr. McGarry, retired president of an auto consulting firm, and his wife, Betty McGarry, retired English professor, were moved by the depth of the performance. Mrs. McGarry said, “We were talking a few moments ago about how interesting it was that the program includes the current scenes in Tiananmen Square, that it brings the story of the culture all the way forward.”

The performance, The Choice, reveals a contemporary scene unfolding on Tiananmen Square. Falun Dafa followers are brutally beaten by police. When a young woman steps in to defend them she meets with earthly tragedy. However, under Heaven’s watch, goodness ultimately triumphs, says the program booklet.

The performance also resonated with Mr. McGarry. He said: “I think that part of the program was pretty incredible. I think it brings through the whole story of what’s going on in China at this particular point in time and how they are being suppressed by the communist party and everything else.”

He appreciated how the performance spanned 5,000 years of China’s classical culture. “I think the subject matter from the beginning to the end, the fact that they bring in the current situations that the Chinese people are going through, I think it’s pretty incredible how they bring it from the origins. I just think that the whole program—I’m just enjoying everything about it, it’s just incredible!”

Almost in unison the couple exclaimed, “The color, the music, the dance!”

Mrs. McGarry expressed her admiration for the dances. “I like it very much. It’s very beautiful. I’m impressed with all the coordination, they don’t miss a beat or a movement! Very, very good. I loved the Lotus Leaves, just all the manipulation of the fans, to fully open to half open, that was intriguing.”

Referring to the performance, Qing Imperial Guards, Mr. McGarry said, “I thought the men with the fan dance was just incredible, just a wonderful program to see.”