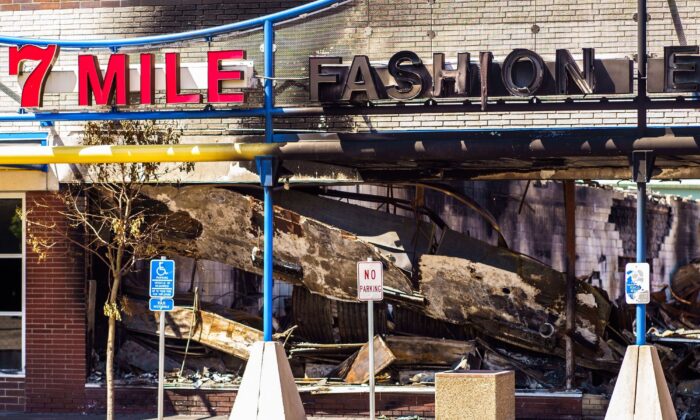 Officials in Minneapolis said property damage due to looting and vandalism that followed protests over the death of George Floyd has caused at least $55 million in destruction.

Around 220 buildings were damaged or set ablaze in the city where Floyd died in police custody on Memorial Day, according to officials cited by local news outlet CBSN Minnesota who believe the tally of property destruction is likely to rise.

Minneapolis Mayor Jacob Frey is expected to ask for state and federal aid to help repair the city after the wave of civil unrest, which has abated in recent days as the National Guard was brought in to support local law enforcement.

“We’re going to need a really big package,” Frey said during a tour of the wreckage, the New York Post reported.

Local lawmakers reviewed the damage firsthand Thursday in tours of the hardest-hit areas in Minneapolis and St. Paul.

“We definitely need all the help we can get from the state,” St. Paul Mayor Melvin Carter told Fox9 in an interview during the tour. “We haven’t quantified [the damage] yet. I’m hopeful we’ll have specific numbers very soon. But one thing that’s clear at the beginning is, it’s going to be staggering.”

Ahead of any potential aid package, local community members and organizations are looking to support damaged neighborhoods. According to a donation page headlined by the West Broadway Business and Area Coalition and the Northside Funders Group, a campaign to support Minnesota businesses damaged in the looting has already raised over $1.4 million.

Theresa Swaney of the Lake Street Council, a local nonprofit engaged in fundraising, told ABC News that around $4.5 million has been raised to rebuild the historic Lake Street area of Minneapolis.

Swaney said many of the businesses were already struggling due to the pandemic, and the riots exacerbated their pain.

“I’d say it’s more than a double hit, a triple, quadruple, hit,” she told ABC, adding that the looting and fires have affected every single Lake Street business in one way or another.

“A lot of them can’t even reopen now because they’ve been looted; they have no inventory, they have no shelves,” she added. “It’s going to take a lot for them to reopen and be able to serve their communities.”

The Lake Street area is known for its large Latino and Somali American population, with Swaney saying that many of the businesses along the 6-mile strip are “either owned by immigrants or people of color.”

Another hard-hit area by looting and vandalism is a 1-mile path of University Avenue in St. Paul’s Midway area, the Minneapolis Star-Tribune reported.

The Minneapolis Police Department issued a warning about possible dangerous objects left behind by looters and vandals.

“The Police Department is asking residents to check their property for harmful objects that may have been left by uninvited people. Propane tanks, bottles filled with gasoline and other substances have been reported, although field staff are not seeing much of it,” the police deparment stated on June 3.

“This is very dangerous. The City is blocking sidewalks to keep people away from damaged buildings and working with property owners to secure their properties and get emergency demolitions started as fast as possible,” the City of Minneapolis said in a statement.

Prosecutors this week upgraded charges against the former Minneapolis Police Department officer, Derek Chauvin, to second-degree murder and charged three other officers with aiding and abetting in the case of Floyd’s death, the fallout from which has rocked the nation with protests, some of which have turned violent.