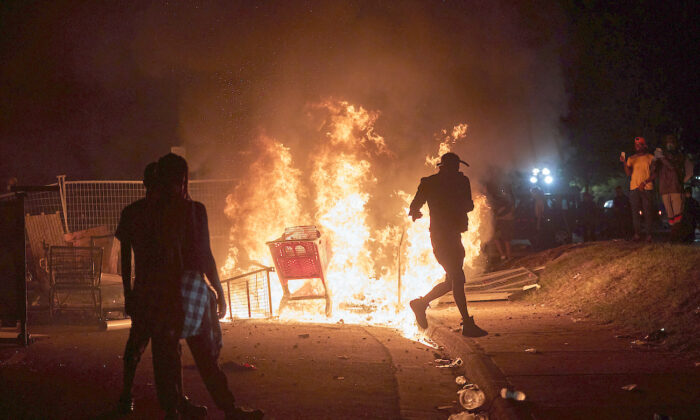 Protesters gather to watch shopping carts burning near the Minneapolis Police third precinct in Minneapolis, Minnesota, on May 27, 2020. (Adam Bettcher/Reuters)
US News

Minneapolis Police Chief Says Violent Protesters Not From the City

Minneapolis Police Chief Medaria Arradondo said on Thursday that many of the people who looted businesses and set fires amid the peaceful protests of George Floyd’s death on the second night of protests are not believed to be from Minneapolis.

At a press conference on the ongoing investigation into Floyd’s death, Arradondo was asked about allegations that some people who were looting businesses were from outside Minneapolis.

“There are allegations that some of the people who started some of the break-ins, looting businesses were folks, outside agitators, and we’ve been hearing people all over social media right now, any leads on that?” a reporter asked.

“I will just say that it was clear to me and also hearing from our local community leaders, that many of the people that were involved in the criminal conduct last night were not known Minneapolitans to them,” Arradondo said, referring to Wednesday night’s protests in Minneapolis.

“There were certainly people who were involved in the activities last night that were certainly not recognized as being here from the city,” the police chief said, adding that he is keeping the Mayor briefed about the allegations.

“I want to preface this. The vast majority of people that have come together have been doing so peacefully, but there was a core group of people that had really been focused on causing some destruction,” he continued. “Certainly we saw that with some of the looting and in setting fires. We were certainly prepared in terms of that immediate area to provide for the safety.”

He said that “the crowds got large and they became more mobile” on Wednesday night, adding that police authorities’ number one priority on the night was preserving life.

“We wanted to make sure that we were looking at [the situation] from those who are gathering peacefully in the area, who were also being threatened and risked, our neighboring residents, and also those businesses,” he said, and reiterated that “there was a shift that certainly occurred [on Wednesday] night.”

He also reiterated that “the vast majority of our Minneapolis community was not participating in the criminal conduct that occurred” on Wednesday.

News helicopter footage on Wednesday night showed protesters in streets near the city’s 3rd Precinct station, with some running in and out of nearby stores. A Target, a Cub Foods, a Dollar Tree, and an auto parts store all showed signs of damage and looting. As darkness fell, fire erupted in the auto parts store, and city fire crews rushed to control it.

The 3rd Precinct covers the portion of south Minneapolis where Floyd was arrested. Protesters set the 3rd Precinct station on fire late Thursday night, the third consecutive night of protests across Minneapolis,

Disturbing video footage from Monday showed 44-year-old police officer Derek Chauvin with his knee on Floyd’s neck for almost 8 minutes, as Floyd begged officers not to kill him, while repeatedly calling out “I can’t breathe.” Police had sought to arrest Floyd.

Floyd, a 46-year-old father of two, eventually became unresponsive, and was later pronounced dead on Monday night after authorities took him into custody.

President Donald Trump said on Wednesday that he ordered the Justice Department and the FBI to expedite an investigation into Floyd’s death.

“My heart goes out to George’s family and friends. Justice will be served!” Trump wrote on Twitter on Wednesday.

We have activated more than 500 soldiers to St. Paul, Minneapolis and surrounding communities. Our mission is to protect life, preserve property and the right to peacefully demonstrate. A key objective is to ensure fire departments are able to respond to calls.