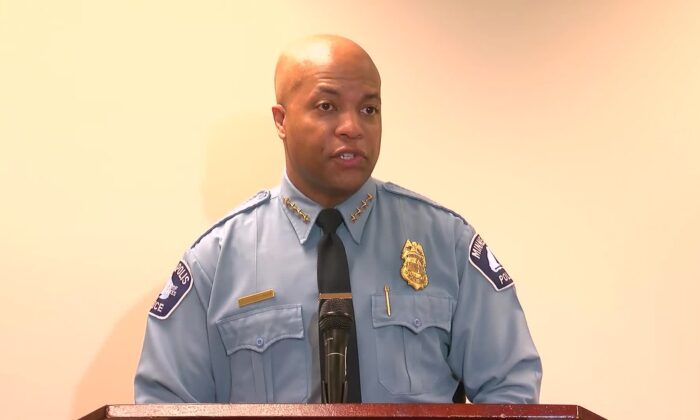 Minneapolis Police Chief Medaria Arradondo speaks during a press conference in Minneapolis, Minn., on May 26, 2020. (Courtesy of WCCO)
US News

Amid a sharp rise of violent crime incidents in the city of Minneapolis, council members held a meeting on Tuesday after Police Chief Medaria Arradondo plead for assistance from outside police forces to help with their shortage in staff.

“Resources are hemorrhaging. Our city is bleeding at this moment. I’m trying to do all I can to stop that bleeding,” Minneapolis Chief Arradondo said, the Minneapolis Star Tribune reported.

Minneapolis residents also urged city leaders to find a strategy to reduce violent crime incidents in the city as the statistics are showing the highest numbers in at least 15 years, with 74 people dead and about 500 wounded by gunfire in 2020.

The staff shortage in the force comes after dozens of officers have left the department. Officials voted to cut the department’s budget by $1 million earlier this year and also threatened to dismantle the entire force and replace it.

Minneapolis had 874 police officers before the city cut its budget. That number is now down to 834, with 121 on leave, police spokesman John Elder said, according to the Star Tribune.

“We’re barely able to cover the shifts that we have,” City Council Member Linea Palmisano said.

Following the police custody death of George Floyd in late May, city leaders pushed to defund and reform the force, but now the city’s violent crime reports are soaring. Besides gun violence, carjackings, aggravated assault, and other high-profile crimes all increased compared to last year’s figures.

In 2019, Minneapolis reported 48 homicides, that number has already increased to 74 so far this year, statistics not seen in over a decade, and it is continuing to rise.

Arradondo asked the city council to bring in between 20 and 40 Metro Transit Police and personnel from the Hennepin County Sheriff’s Office, the Star Tribune reported.

The police chief requested a total of $500,000 in additional funds to enforce the department. His request was passed on Tuesday by the council with just a narrow margin.

During the meeting, which was held virtually, some members of the city council didn’t agree with the chief’s pleas and pushed back his request, questioning the effectiveness of increasing its resources.

“We can go back and forth on the $185 million but that is not stopping the bloodshed that is occurring every day in our city,” Arradondo responded. “If you choose to say no to these victims of crime, then please stand by that.”

The council will hold another meeting Friday with the vote expecting to get passed and extra officers at Arradondo’s request being able to hit the streets as soon as Nov. 15.

The outside officers will possibly be kept in place into next year and have the same power as Minneapolis officers, the Star Tribune reported.